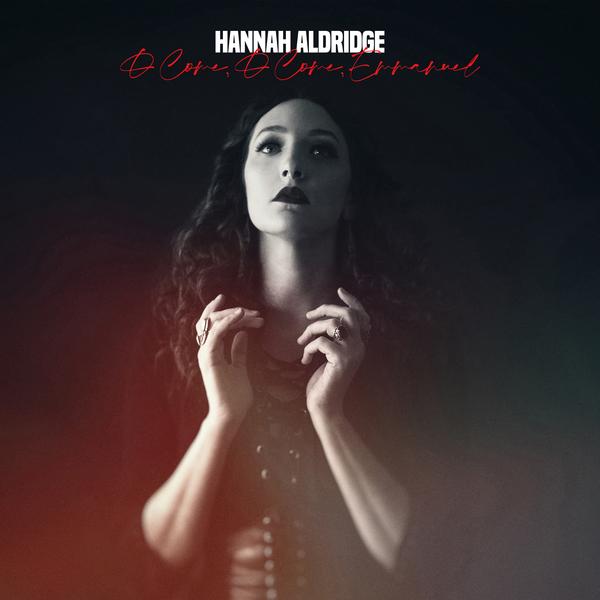 December 17, 2021 – Nashville, TN – Raised in Alabama, a state firmly rooted in America’s bible belt, recording artist Hannah Aldridge has long felt an affinity to the darkness found in Southern Gothic themes and has developed a fondness of writing songs with that dark-leaning aesthetic, often brought on by thoughts of depression or hopelessness. Working with one foot in country music and the other in rock has given her a fresh kind of Southern Rock styled by Southern Gothic storytelling. The honesty she crafts into each track is off-set by her stubborn, even defiant, nature, which gives her music a hopeful silver lining. Today, in the throes of the holiday season, Aldridge—via the avant-garde Swedish label, Icons Creating Evil Art—released the old Christmas hymn “O Come, O Come Emmanuel” in her own hauntingly eery version. Staying true to the sound Aldridge has established from mixing her personal life—and the famous sounds of her hometown of Muscle Shoals—with influences from all across the rock genre, this new track carries all that is to be expected from a Hannah Aldridge recording. Fans can stream or purchase Aldridge’s haunting version of “O Come, O Come Emmanuel” now at this link.

About her new Christmas release, Aldridge says, “It was such a fun experience to get to be back in the studio with my Dad to record a Christmas song.” Aldridge’s dad is legendary Muscle Shoals musician, songwriter, and producer Walt Aldridge. “I don’t get the chance often to work with my Dad, so when the opportunity comes up I am always excited to see what we can create. It can be a daunting task to take such a classic piece of music and try to make it your own, so we tried to bring my personality into it as an artist while maintaining the integrity of the song. In the end, we came up with a version of ‘O Come O Come Emmanuel’ that we felt was exciting and cinematic, without being overdone.”

Hannah Aldridge’s latest single “Sinking,” a cover of the Godhead original from 2001, features the frontman of the band Jason Charles Miller himself, who also produced the track. The two artists initially connected on a shared love of blues, metal, southern rock and their knack for telling haunting yet beautiful Southern Gothic stories influenced by their personal experiences from growing up in the south. ‘Sinking’ is the second single from the recently released 7″ vinyl release via the avant-garde Swedish label, Icons Creating Evil Art. The accompanying video by Johan Lundsten was debuted by Folk N Rock who added, “a new haunting twist filled with raw emotion.” Both ‘Sinking’ and the EP’s previous single ‘Some Ghosts Don’t Make A Sound’ are available digitally.