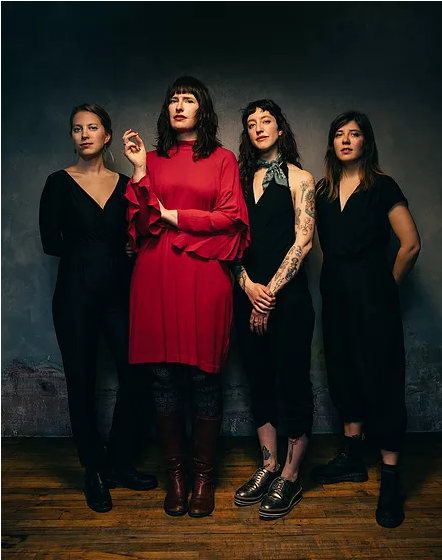 March 22, 2019 — Nashville, TN — Minneapolis-based, genre-melding Her Crooked Heart is releasing the anticipated debut full-length To Love To Leave To Live on May 31st. Led by acclaimed songwriter and multi-instrumentalist Rachel Ries, the record illustrates her journey of building a new life from the ground up; working through a divorce, leaving behind the life she once knew, and finding love again within herself, her family, and her home.

To Love To Leave To Live commences with the cinematic, intimate ballad “Letters”, a bittersweet preface to the road ahead. Ries finds herself filing for divorce on “Courthouse”, wherein the midst of loss, determination, and complete vulnerability, she writes, “If I’m a sinner, then I was a saint, but really I’m just a lady taking back her name.” In the process, highlights like “Windswept” narrate her growth and how she utilized meditation to cope with depression and anxiety, which lead to the poetic album closer “Lamentation”.

Her Crooked Heart will tour as a quartet featuring a dynamic group of women and instruments that span from classical and electric guitar, to piano and vintage synthesizers, as well as cello, woodwinds, and drum triggers, matched by powerful four-part vocal harmonies. The group will tour the Midwest in late May and early June, before embarking on a national tour in late summer, following European dates.

More about Her Crooked Heart:

Since making her debut in 2005 with For You Only, Rachel Ries has been spotlighted by various outlets including Irish Times and NPR’s Weekend Edition. Between regularly touring and collaborating with Anaïs Mitchell, Ries is a producer, visual artist, and founder of Kith + Kin Chorus, a rock & roll choir in the Twin Cities community. Along the journey that is chronicled on To Love To Leave To Live, Her Crooked Heart was born and the debut EP To Gentlemen was released in May 2017. Time and time again, Ries proves her unique ability to write songs that eloquently explore life’s hardships. To Love To Leave To Live is the story of who Rachel Ries has become, and ultimately, a statement of who Her Crooked Heart is.

Catch Her Crooked Heart on tour (more dates to be announced):