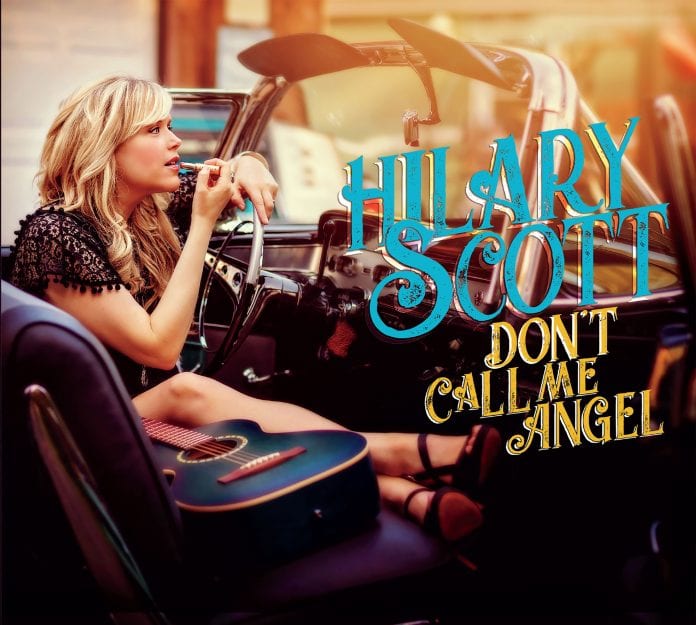 As a multi-instrumentalist, Hilary Scott experiments with different sounds creating as much sonic interest as possible, while still keeping the focus on the integrity of her songwriting. Writing songs with melodies that stick in your head and lyrics that make you think, Scott’s music never fits into one simple genre. Hilary Scott (one ‘L’) has received rave reviews in national and international publications for her 2015 release, Freight Train Love. During that time an interview with Chuck Dauphin for Billboard Magazine introduced much more of the world to her sound and her story. Influenced by the state of our world, the artist also draws on her personal stories and impressions to write songs that resonate deeply with listeners.  In 1998, Hilary’s older brother, Scott died suddenly, leaving a hole in her life that could only be filled with music. To honor him, she took his first name—Scott—as her performance name. Scott’s new record, Don’t Call Me Angel coincides with the 20th anniversary of her brother’s death.

Don’t Call Me Angel was co-produced with Grammy Award-winner, Johnny Lee Schell, who engineered, mixed and played on her last album, Freight Train Love.  Schell was introduced to Hilary Scott by Freight Train Love co-producer, Michael O’Neill, a recognized Americana artist who has since passed away from ALS.  Because of the relationship, O’Neill helped to establish, Scott felt comfortable reaching out and asking Schell to be a part of her new project. Don’t Call Me Angel is also the 12thcollaboration between Hilary Scott and Belltown Records since first signing with them in 2003.

Stylistically, Don’t Call Me Angel is less country than Freight Train Love and incorporates more soul and blues.  As the executive producer, Scott was able to cherry pick studios, musicians, and songs. On Freight Train Love, legendary studio musicians played more of the instrumentals whereas on Don’t Call Me Angel, Scott uses her live show bandmates on all of the main tracks. Along with vocals, Scott brings her skills to the piano, acoustic guitar, and ukulele. Josh Schilling is on bass and electric guitar and playing drums/percussion is AJ Gennaro, who also happens to be Scott’s husband.  Mike Finnigan adds Hammond B-3 organ and Schell contributes electric and acoustic guitar along with cigar-box mandolin.

As part of a crowd-funding campaign for her last record, Scott was commissioned by fans to write over 20 new songs and also to re-arrange their favorite covers. Scott claims that these “assignments” caused her to really focus on her songwriting craft. Two of those songs, “Make it Right” and “In Time” can be heard on the new album.

Scott wrote all songs on the 10-tune CD, with the exception of one cover, a tribute to Prince in the form of the song “Kiss” from his 1986 album, Parade.  “I learned through Prince’s music that absolute genius and depth sometimes hide in a candied pop package,” she states.  “I enjoy interpreting songs in ways that make them unrecognizable.  I turned this one into a bluesy heartbeat.”

The title track kicks off the album, and while in California recording, Scott didn’t have her 12-string guitar with her. To recreate a similar lush sound, Johnny Lee Schell had her play the song twice, on two separate guitars, on two separate tracks, which were then doubled and panned.  “I adore the richness and emotion we captured with that,” exclaimed Scott.  “And holy crap, I got to play Johnny’s prized guitars!!”

Scott experiments with a baritone Cordoba ukulele on “Unlove Story”, a song that she calls, “The most joyful melancholy song I’ve ever written”, while her sense of humor is evident on “Moon and Back” – I love you to the moon and back/ but is that really very far/I’ve almost put that many miles/On my earthbound car. The album ends with “Here I Am”, a song Scott had in her pocket for a while that found it’s soulful home on Don’t Call Me Angel.  “This song represents this entire album,” Scott explains.  “Here I am, world.  This time around, I controlled the entire project; it’s just me, uncovered and openhearted.  I wanted everything about this album to be as timeless as possible.”

Scott credits AJ Gennaro as being an integral part of the record. “The songs as you hear them started with me writing them, then singing them for my husband, then us rehearsing them with him on percussion, and deciding which other instruments to add.” They then perform the songs on the road as a duo and determine how audiences receive them. Whenever possible, they take multi-instrumentalist, Josh Schilling on the road with them. “It’s truly saying something”, stresses Scott, “when you like the person behind the instruments as much as the sound those instruments make.”

Playing baby grand for all of the piano tracks (and apparently the same baby grand that Ike and Tina Turner used for many years), Scott liked the jangle the piano had as it cut through the other instrumental sounds.  Schell’s skill at layering harmonies is evident on the album, and his use of cigar-box mandolin is of special note:  “He has toured and recorded with just about everyone, and he pulls out this unassuming instrument and makes it sound like magic.”  Scott also notes, “ Mike Finnigan, who played organ for Jimi Hendrix and so many other legends, laid down some Hammond B-3 that makes this record shine.  I feel like his organ line ‘duets’ with me on ‘Make it Right’ because he even went so far as to play a harmony line to my vocal near the end.”

The Columbia Daily Tribune once described Scott’s voice as “an embarrassment of riches”.  With Don’t Call Me Angel, the artist uses this bounty and has crafted a more measured and mature song cycle. With the sense of both hope and humor and a lot of soul, Hilary Scott shines a light on the beauty found in humanism in each and every track.