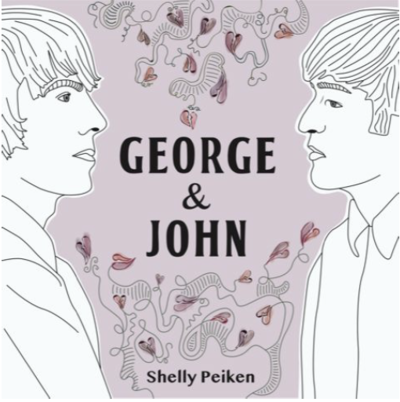 “I always wanted to write a song that would be an emotional analogy between losing half of myself in a break-up and the heartbreak of losing half the Beatles,” Peiken explained to Parade Magazine. “On a songwriting trip to London I relayed the idea to Phil Thornalley, a fellow Beatles enthusiast. His eyes lit up. A few weeks after returning home he sent me some music. When I pressed play my jaw dropped. I didn’t take the headphones off until every word was written. ‘George & John’ is a sonic love letter to the Beatles. Anyone who ever loved them as much as I did is gonna dig it!”

Peiken who is a career songwriter is responsible for penning some of the most memorable songs of the past twenty years many of which went on to become anthems of empowerment such as Christina Aguilera’s “What a Girl Wants” and “Come on Over Baby,” Meredith Brooks’ “Bitch,” Mandy Moore’s “I Want to be With You,” Brandy’s “Almost Doesn’t Count,” The Pretenders “Human,” Jessie J’s “Who You Are,” “Rotten To The Core” from Disney’s Descendents and hundreds more songs for artists such as Selena Gomez, Demi Lovato, Miley Cyrus, Britney Spears, Reba, Natasha Bedingfield, N’Sync, INXS, Celine Dion, Keith Urban, Mark Wills, Cher, Smash Mouth and more. Collectively her songs have sold an excess of 50 Million records (see the full list HERE).

This year after years of writing and working for other artists, Peiken is celebrating her incredible career in music by revisiting some of her biggest hits by recording her own versions of her most beloved songs along with a number of originals, such as “George & John,” culminating into an album entitled 2.0 etc. coming out this summer. “George & John” is the second single off of the 2.0 etc. album, and follows up Peiken’s version of “What a Girl Wants,” released last month, to celebrate the 20th anniversary of the song becoming the first number one of the new millennia on January 1, 2000.  Peiken shared the story of writing “What A Girl Wants” and her experience of it hitting that number one spot with Billboard this month as part of their “My Billboard Moment” feature, along with American Songwriter, Variety and SiriusXM.

Peiken got her start as a young writer in New York in the 90’s, but a lot has changed since then. The digital economy has made it nearly impossible for most songwriters to sustain a livelihood so Shelly made it her business to do something about it.  She became a founding member of SONA (Songwriters of North America) a creators’ rights advocacy organization that has been making a name for itself preserving the value of songs and songwriters in a new music marketplace.

In 2018 she penned a memoir, Confessions of a Serial Songwriter, which gave a humorous and honest look at her career as a working songwriter who has navigated the shift from physical to digital, weathered ageism, sexism and most importantly, showcases her love for music and the pure joy that she gets from the creative process. The book was nominated for a GRAMMY for Best Spoken Word Album at the 60th GRAMMY Awards.