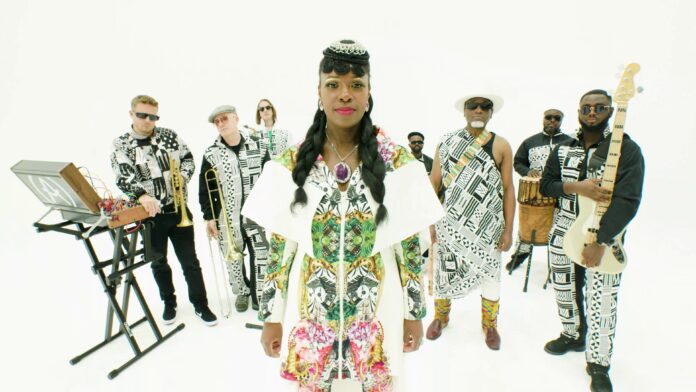 Ibibio Sound Machine’s new single “Protection From Evil” has frontwoman Eno Williams wielding a massive synth line from Hot Chip’s Al Doyle like a spiritual shield against unspecified, malign forces—unspecified because Williams is speaking in tongues. Her lyrics are onomatopoeic, their meaning defined in her energetic delivery.

The explosive track opens the London group’s fourth and most progressive album Electricity, produced by Hot Chip and out March 25 worldwide. It arrives today with news of Ibibio Sound Machine’s upcoming appearance at the BBC 6 Music Festival and an accompanying music video directed by Tiago Di Mauro that matches the song’s creeping intensity.

Di Mauro on working with the band:

I’ve long been a huge fan of Ibibio Sound Machine, and their Afrofuturistic techno sound has resonated deeply in my native Brazil. When Max Grunhard from the band sent me the track and explained its commentary on the duality of conflict and discourse, it was important for me to communicate this within the video, especially considering the abstract lyrics. The look was inspired by Carmen Miranda’s “The Lady in the Tutti-Frutti Hat,” but we wanted to put a contemporary spin on these mid–20th century soundstage performances and create an experience that conveys a similar sense of awe and scale but was as methodically chaotic as the track.

For more Ibibio Sound Machine, check out previous Electricity singles “All That You Want” and the album’s title track, the former described by Cool Hunting as “a masterful Afrofuturist pop track that incorporates elements of electro-pop, soul and Afrobeat.”

Pre-order Electricity on CD, LP, and yellow & black splatter Peak Vinyl in the Merge store and participating independent record shops. Catch Ibibio Sound Machine at this year’s BBC 6 Music Festival and on their UK dates below.