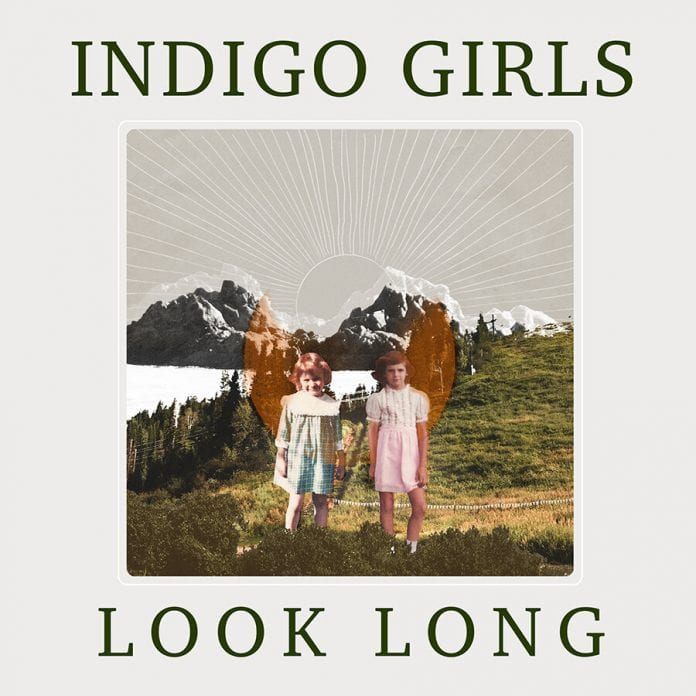 “We’re still a bar band at heart,” says Emily Saliers, ahead of Indigo Girls’ 16th album, Look Long (April 24 / Rounder Records). “Today, we joke about being old, but what is old when it comes to music? We’re just as inspired by younger artists, and the passion feels the same as it did when we were 25 years-old.”

And with that spirit, Amy Ray and Emily Saliers told themselves they “weren’t going to put boundaries on what an Indigo Girls song should be.” Check out the first single, “Shit Kickin'” on all streaming services and Youtube.

Produced by John Reynolds at Peter Gabriel’s Real World studios in Bath, England, Look Long was born from a need to sing songs and bolster each other.  “People can feel lost in these times,” Saliers explains. “Let’s lament our limitations, but let’s also look beyond what’s right in front of us, take the long view of things, and strive to do better.”

In 1999, Reynolds produced Indigo Girls’ beloved album, Come On Now Social, a time described by Ray as “one of the most important moments in our musical growth.” They’ve reunited with that same band: Reynolds on drums, bassist Clare Kenny, keyboardist Carole Isaacs, cellist Caroline Dalea and guitarist Justin Adams, joined by their longtime violinist, Lyris Hung and vocalists Lucy Wainwright Roche and Lucy Jules (George Michael). Before flying to England, the two had agreed, “Whatever happens in the studio will happen,” says Saliers. “A lot of magic unfolded because of that decision.”

Among the many highlights are “Country Radio” (hear a great full-band version on Live From Here with Chris Thile) and Reynolds’ arrangement of a recent live staple, “Howl At the Moon.” “It’s something I always do with my daughter, when we’re out in the woods,” says Amy. “I did it with my friends, when we were kids. It’s means you’re happy, you’re free. Explore the irreverent, but also honor the things that you should.  Don’t be afraid.” In the song “Feel This Way,” Emily is singing to her younger self. She adds, “Enjoy everything, suck it all up now.”

The power of unity has always been an Indigo Girls calling card, and maybe because of it, they’ve been having a resurgence: Their audience has become more expansive and diverse, and they have a new generation of devoted peers, like Brandi Carlile and Justin Vernon, who recently said on the Broken Record podcast how he, “…adored them more and more—the more they had strength in the face of their adversity,” says Vernon. “They’re my favorite group ever.”

Since their 1989 self-titled, breakout album, the Grammy award-winning duo has racked up a slew of gold and platinum certifications and sold-out tours around the world, all while engaging in committed and uncompromising social and political activism, including immigration reform (El Refugio), LGBTQ rights, education (Dolly Parton’s Imagination Library), death penalty reform, and sustainability in Native communities. They are co-founders of Honor the Earth, a non-profit dedicated to Indigenous environmental justice and green energy solutions. They have granted over three million dollars to Native-led grassroots groups and campaigns fighting against bad energy projects but also funding sustainable ones.

Look Long will be available everyone April 24 on Rounder Records.

Ticket and show information can be found here.