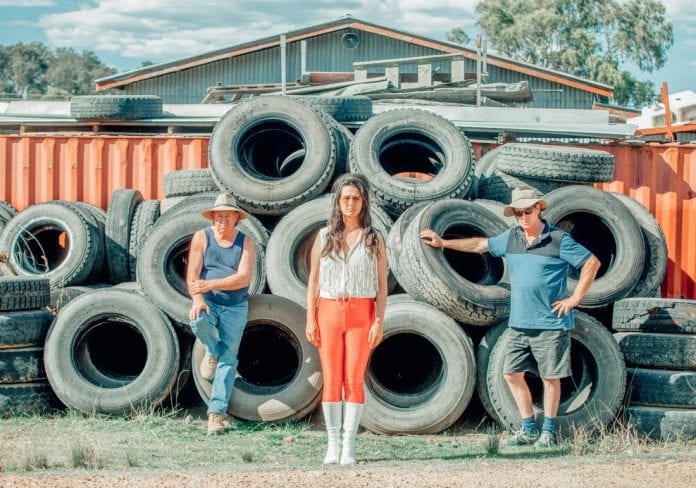 Australian songwriter Jess Ribeiro has shared a video for her new single, “Stranger”, out today via Barely Dressed Records – share via YouTube.  Produced by Ben Edwards (Aldous Harding/Marlon Williams/Julia Jacklin) and recorded as a 3-piece Dave Mudie (Courtney Barnett) and Jade Imagine, ‘Stranger’ displays another shift in sound for the singer.

Ribeiro has kissed the swampy humidity of the Australian Music Prize-nominated Kill It Yourself goodbye, and embraced the precise down-strokes and valve-amp hum of a very New York lineage, from the Velvets through to Blondie and Talking Heads. It’s capped by those lethally cool vocals for which Ribeiro is revered.

In “Stranger” Ribeiro’s voice travels as a narcotic purr; as she explores infatuation and all the daydreaming that comes alongside it. Ribeiro references the 19th-century French writer Stendhal and his recognition that “this is a love that lives only through the imagination”.

Discussing the Nick McKinlay-directed video, Jess explains, “this music clip was made at my families truck yard in outback Australia. It features family members including my Uncles Chris, Tim, Pat and Anthony Kelly (martial artist – & Guinness World Record holder!)” Jess makes her film entrance tearing up the paddock doing doughnuts in her Uncle Chris’s V8 Ute, but soon everyone wanted to get involved; “as we brought out the Ute, everyone wanted to bring out their toys – including the military world war 1 Harley Davidson. Lot’s of cars and bikes didn’t make it through the final cut but that’s what happens when you make a song that goes for less than 4 minutes”

The near-untouchable quality of Ribeiro’s recorded output is astonishingly consistent and the wait for new music is always worthwhile! No doubt there will be more gems to come from Ribeiro in the coming months.