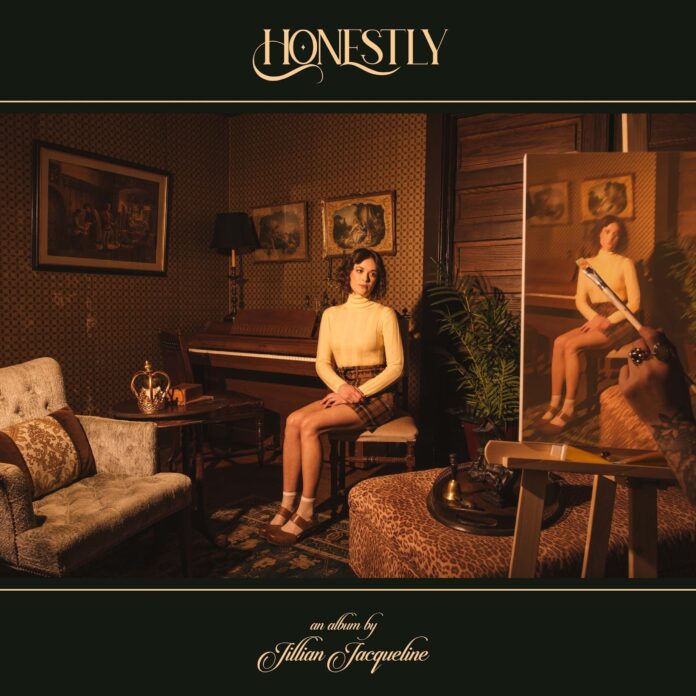 NASHVILLE, Tenn. (June 10, 2022) – Critically-acclaimed singer-songwriter Jillian Jacqueline’s debut album Honestly (UMG Virgin) is officially out today. Lauded by American Songwriter as “grounding and cathartic and boldly human,” the extremely personal, eleven track album was co-produced with Jacqueline’s husband Bryan and brother-in-law Tofer Brown, and reveals her depth and craft as a songwriter. Of the album, she shared “After 14 years in Nashville, this is my first fully realized album, one that runs the gamut of me as a person and an artist. Listen to Honestly, here: https://jillianjacqueline.lnk.to/honestly.

The Tennessean recently shared an in-depth, behind-the-scenes look at Jacqueline’s creative spaces at home, and how that helped influence her songwriting, and the making of her debut. Read the full lifestyle feature here: https://www.tennessean.com/videos/entertainment/2022/06/01/jillian-jacqueline-gives-tour-her-home-madison/9953824002/

Teaming up with a monumental roster of talent and songwriters in Nashville, Jaqueline’s debut album includes collaborations with Charlie Worsham (‘The Ocean’), T.J. Osborne (‘Better With A Broken Heart’), and Trevor Rose of Old Dominion (‘Bandwagon’). She reunited with hit songwriter Lori McKenna, and co-wrote songs with Shane McAnally, Daniel Tashian, Kate York and more.

Throughout, the wealth of perspectives shape the beautifully-crafted set of songs that include the recently released “Iconic,” which premiered via People.com “giving fans an intimate peek at her love story with husband Bryan Brown,” and was written about the aftermath of being a child of divorce. Powerful duet “Better With A Broken Heart” was hailed by Billboard as “some things are just meant to be together, like broken hearts, smoky bars, meandering drives and this moody, bluesy song that bears witness to emotional wreckage,” and earlier this year, American Songwriter revealed her song “Magic.”

Beloved by artists, critics and fans alike, Jacqueline garnered nearly 100 million streams with a sequence of initial EPs and singles – including hit tracks “Reasons,” “God Bless This Mess,” which she co-wrote with Lori McKenna, and “If I Were You” featuring Keith Urban. Jacqueline has received critical praise for her compassionate songwriting and exquisitely winsome vocal allure, with Billboard noting her ability to “balance her blatant honesty with unshakable optimism… helping separate her from the pack of country mainstays.” Rolling Stone seconded that, pointing out that she has a way of melding “downright melancholy concepts with enough bursts of joy to make pondering the bad stuff a whole lot less painful,” and NPR describing her as an “unvarnished communicator.”

Jacqueline is gearing up to join CAM’s The Other Side Tour with upcoming stops in Seattle, WA (7/29), Los Angeles (8/5), and Chicago, IL (8/12). For tickets and more information, visit https://www.jillianjacqueline.com/.