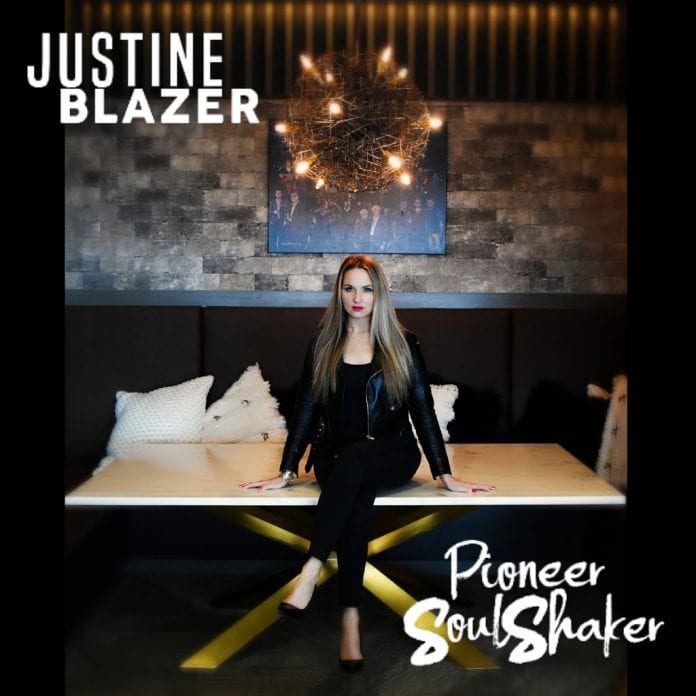 NASHVILLE, Tenn. (March 8th, 2019) – Nashville based singer, producer, songwriter, and recording artist Justine Blazer celebrates International Women’s Day with the release of new single new single Pioneer Soul Shaker. The new single is available on all streaming platforms.
“Pioneer Soul Shaker is about a big, strong, and optimistic female,” explains Blazer. “Even though life gets tough, persevere through life’s challenges, keeping your head high, high heels on and maintain your soul, spirit, and authenticity. This song is to inspire people to keep going, no matter how hard their path may be.”

Recently, Justine Blazer signed a distribution contract with Victory Music Buzz for the release of the single and upcoming album. Justine’s new album will be available for pre-order on March 15th.

Nashville producer, singer, songwriter and recording artist, Justine Blazer, has been taking the country world by storm. Her unique style of edgy country/pop/rock is infused with a hint of Detroit soul and modern vibes.

In 2013, she released her 4th studio album “Gasoline”. She wrote/co-wrote all 12 songs. It was recorded at the acclaimed Sound Stage Studios on Music Row, produced by Nick Autry and mixed by Billy Decker. She had much success with this album. Her first single, “Not Going to Take You Back” hit Top 100 on the Music Row charts, along with a successful radio tour. Then “Gasoline” was the #1 most downloaded song on the Play MPE List. Following was “Las Vegas”, added to the IHeartRadio country station new artist rotation. Then her next single and music video for “Amen for the Weekend” was added and aired on GAC, ZUUS, TNN and more. Her last single off the album was “On The Edge With You”. It hit Top 10 on the European Charts, sparking a European Tour in 2015.

In the Summer of 2016, she was selected to be on the new TV show, “American Supergroup”, produced by Anastasia Brown, Kevin Wayne Waldrop and Gary Wayne Bridges. It aired on MTV and POP Networks.

She went on to release her 2017 current single entitled “Like It Never Happened” then followed up with “Lie Anymore” and then her 2018 single release “No Tomorrow”. Since the summer of 2018 she has been working on her 7th studio album, “Pioneer Soul Shaker” slated to be released in the spring of 2019. Justine produced, engineered, mixed and mastered the whole album in it’s entirety. It features 12 tracks, with her debut single of the album “Pioneer Soul Shaker”