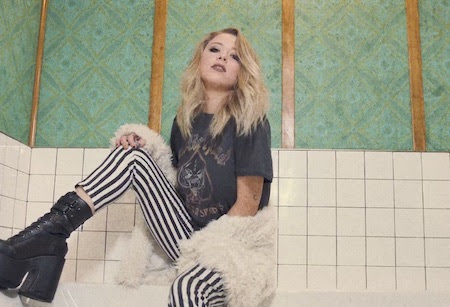 Kalie Shorr hit a new milestone in her career with the world premiere of her truth-telling music video “My Voice” by CBS/Viacom billboards in Times Square, CMT and CMT.com. Never one to censor herself, the song has Shorr airing her grievances about inequality within the very industry that she has fought for success in by perfectly blending her main musical influences of pop-punk and country. The video was directed by Tyler Dunning Evans (Backstreet Boys, Steve Aoki) and reflects Shorr’s confidence and strong personality. Watch the video here.

“This video is so different than any I’ve ever done for so many reasons. Obviously, it was shot during a pandemic so we had to be really intentional about it and prioritize safety, which I’m happy to say we did. The team was so amazing to work with. It’s also so out of my comfort zone – I wanted to challenge myself to do something different. Tyler and I were really inspired by Fiona Apple and Radiohead, and wanted to bring that ’90s effortless edge to the aesthetic. Shooting at the Dive Motel felt so perfect. Shooting this video really made me laugh because I was like ‘wait, is dancing around in my underwear and drinking tequila in a bathtub my job?’ but like… where is the lie? It was just so fun. I literally cannot believe that this is premiering in Times Square on the CMT/Viacom billboard. I wish I could be there to see it in person, but I have zero complaints. It’s truly a dream come true,” says Shorr.

Too rock for country, too country for punk
But who said I had to pick either one
Tattoos at the Opry
I could cover em up but it’s not me
If I stick to the script when I’m talking
Sit on some laps then my song’ll go top ten
Nashville’s cranking out Chryslers just like it’s Detroit
But guess what I can’t change
The sound of my voice

Last Friday, Shorr followed up the release of her critically acclaimed debut album Open Book with the deluxe edition, Open Book: Unabridged. Adding four new songs to the mix, listeners get a chance to hear the next chapter of her story in Shorr’s signature authentic, self-assured fashion. In celebration of release week, Shorr was featured on the cover of the popular Wild Country playlist on Spotify and Forbes featured an interview with her about the new music. Listen to Open Book: Unabridged here.

Yesterday, Shorr was named Facebook’s Artist of the Day, an esteemed all-genre honor, and celebrated with an exclusive video showcasing her mixology talents.

After releasing “My Voice,” Billboard boldly stated,”Shorr has proved she doesn’t need radio, but if radio is smart, it will realize it needs her.? Radio listened and since then the nationally syndicated iHeart shows “Country Top 30 with Bobby Bones” and “Women of iHeartCountry” have given “My Voice” airplay.

Of “My Voice,” Sounds Like Nashville said, “The tongue-in-cheek tune is equal parts pop-rock and country, and details Shorr’s unflagging decision to stay true to herself. In a business filled with critics and nay-sayers, she acknowledges it isn’t easy, but doesn’t waver in her stand.”

“My Voice” and the other new songs from the album have been supported by Spotify (Wild Country, RADAR Country, New Music Nashville, Fresh Finds and Young Nashville), Apple Music (New In Country and Soundcheck), Amazon (Breakthrough Country) and Pandora (New Country Now and Rising Women of Country) as well as NPR Music’s New Music Friday, CMT Next Women of Country and CMT The Roundup playlists.