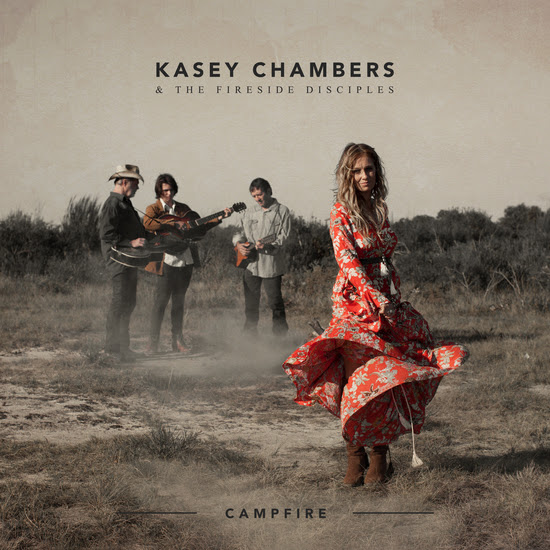 Australian country icon Kasey Chambers is pleased to announce the release of her 12th studio album, Campfire, out today.

Joining Kasey on Campfire is her band The Fireside Disciples, consisting of three of her favourite musicians – Brandon Dodd, who has toured the world with Kasey over the last three years; Alan Pigram, a long-time family friend, fellow musician (from the renowned band The Pigram Brothers) and Indigenous elder from Broome WA; and of course her Dad, Bill Chambers, who has been the biggest musical influence of her whole life.

Kasey explained her special inspiration for the album – “I grew up in the remote outback of Australia living a unique lifestyle isolated from civilization. The campfire was the heart of our existence: for survival, creativity, inspiration. We hunted all our own food and then cooked it on the campfire. My brother and I did all our schooling via correspondence around the campfire. We used the campfire for warmth and light. We gathered around the campfire at night to play songs together as a family. Our connection to music and the land has developed through and around the campfire since I was born, so it has always stayed with me as a special part of my life.

A taste of what fans can expect from Campfire comes from the aptly titled The Campfire Song, with the official video released today and now streaming here.

Having grown up listening to the music of Emmylou Harris, Kasey is thrilled the esteemed American country star appears on the Campfire track, The Harvest & The Seed. “It is an absolute dream come true that I actually have Emmylou Harris singing a duet with me on Campfire,” Kasey says. “She ended up being an “honorary” Fireside Disciple for the album.”

Campfire is an album that Kasey has wanted to make her whole life. The album represents the connection she’s had to different lands and cultures throughout her life and drawing from the regions that have influenced her the most – Australia, Africa, Norfolk Island and America. “All these 4 places have had a significant impact on shaping who I am both musically and personally. From my early years of my family drawing from the Aboriginal way of life in the outback of Australia to experiencing the African culture and immediately connecting with it, living the seaside lifestyle in Southend, South Australia and later on, my time living on Norfolk Island to then many years of touring throughout America and being inspired by their musical culture, I have taken all of those experiences and put them into the songs and sounds for Campfire…”

Following the release of Campfire, Chambers will embark on a massive Australian tour consisting of almost 40 dates throughout May, June, July, and August. She has plans to tour North American later this year. An announcement will be made soon.