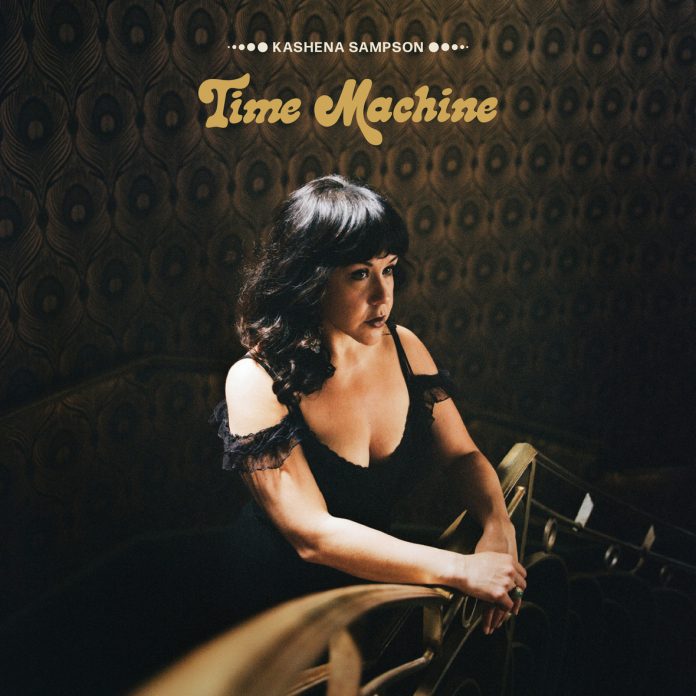 NEW YORK — September 10, 2021 — It’s been a little more than a year since Kashena Sampson’s life shifted, since her plans changed, since she re-grouped and found a way amidst incredibly difficult circumstances: since moving to East Nashville in 2015, the singer-songwriter has funded all of her music through her job bartending at Nashville’s iconic music venue The Basement East, which was destroyed by the March 2020 tornado just a few weeks before the pandemic hit. If her new album, Time Machine, out today, is Sampson discovering her own resilience, its release may just be the strongest example of it.

Last year, Sampson had started to put plans in place for the release of Time Machine, an 11-song journey through her struggles with codependency and finding herself, but then — well, life happened. “I had $3 in my bank account but I thought, ‘I’m working on Tuesday, I’ll be ok. Then the tornado hit and that didn’t happen,” she says.

“I had the record ready to go, and then the tornado took away the funding for it,” she says, in a matter-of-fact manner that speaks a lot about who she is: Sampson is easygoing by nature, but also quietly assured in her ability to consistently figure things out. “Here in times of stillness, I know I’ll be okay / If I listen to it closely, I always find my way,” she sings on the album’s title track.

Time Machine was recorded in February 2019 with producer Jon Estes, who played bass, piano, cello and organ on the album, and with whom Sampson also worked with for 2017’s Wild Heart. They tracked everything to tape over two days, along with Jeremy Fetzer on guitar, Jon Radford on drums and Elizabeth Estes on strings. The album has received early acclaim from outlets including The Bluegrass Situation, Americana UK, and others.

“Hello Darkness” is the lone cover on the album, originally performed by Dutch psych-rock band Shocking Blue. Covers themselves are familiar territory for Sampson, who spent several years performing on a cruise ship that took her around the world. She performed a wide array of shows ranging from Opera to Motown to Broadway and ’60s and ’70s covers. Eventually, mixed in among Joan Baez, Dolly Parton and John Denver, she started adding in her original songs that her patrons loved.

Following her travels, Sampson ventured to Nashville — sight unseen. In the years since her move in 2015, she’s become a valuable member of the local music community, as evidenced by some of her co-writers on the album: Erin Rae, Mary Bragg and Kyshona Armstrong. Along with Sampson’s sister, Jolana Sampson, all of the originals were written by women.

“Alone and In Love Again,” which Apple Music’s Record Bin Radio premiered, along with “The Black Sea” and “Work of Art,” each discuss various aspects of relationships: dysfunction, nostalgia and eventually moving on. “I Plead Desire” is a classic fairytale of unrequited love, inspired in part by a misheard lyric from Judee Sill’s “Jesus Was A Crossmaker.” “From The Outside” takes a closer look at the daily struggles of a musician’s life.

“Little Spot of Sun” presents an opportunity to appreciate the small joys in life, like a dog laying in the sunshine. Holler notes: “Against inflections of traditional country…her vocal presence blends the big-voiced country legends of yore with a touch of blues.”

“No matter what our past struggles have been, we can choose to live in the moment and find gratitude in each day. It’s a reminder that nothing is permanent. When things are bad, hold on because it will get better again, and when things are good enjoy it because there will be low spots again.”

Sampson will play an official showcase at this year’s AMERICANAFEST, Saturday, September 25, at 11:00 p.m. at City Winery in Nashville.