Home News Music News Kylie Frey’s “Spur Of the Moment” Is Fastest Rising #1 On The...

Humble to her core, when Frey heard the news she said “I’m thrilled, so happy that my friend, and fellow songwriter Bri Bagwell and I are the first back to back female #1’s in the history of the chart. I’m pretty pumped about it!”

The Louisiana native has found a second home in the hearts of Texas country fans who have now claimed her as their own. The fact that the feisty beauty has been embraced by both fans and some of the finest troubadours in Texas is no surprise. Frey’s voice is powerful and unique while her lyrics are as authentic as her dusty, battle-scarred rodeo roots.

Frey’s father, Billy Frey, appears on the cover of her single “Spur Of The Moment” riding his bronco at Cheyenne Frontier Days (the world’s largest outdoor rodeo). Kylie followed in her father’s footsteps with a passion for riding and rodeo, and became Louisiana State rodeo queen in 2010, then Louisiana High School’s state goat tying champ in 2011. Frey’s gift as a songwriter showcases a unique blend of her rough riding roots interlaced with moments of passion and tenderness. A killer combo that’s quickly earned the respect of the deft Texas songwriting and musical community.

Frey has opened shows for Billboard chart-topping heavy hitters Cody Johnson and Aaron Watson, she recorded her first chart-topping duet with critically acclaimed songwriting master Randy Rogers, and recently wrapped filming a music video with fellow Texas chart-topper David Adam Byrnes for his upcoming single “Old School.” In the video, Frey co-stars as the fetching female lead who turns away potential suitors at the bar until an old school cowboy, played by Byrnes himself, steps up to the plate. 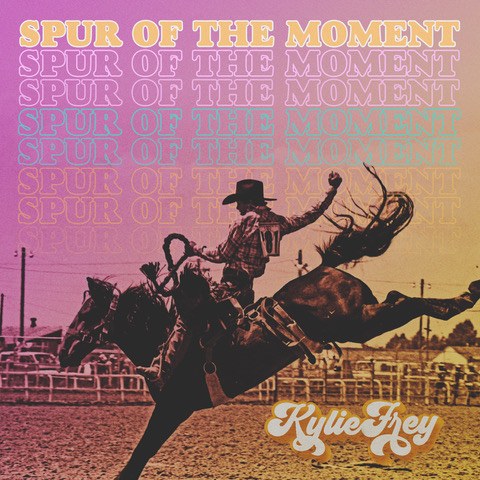 This month, Kylie is the August Cover Artist for Spotify’s TEXAS MUSIC NOW playlist. To hear Frey’s latest chart-topper “Spur Of The Moment” click HERE. To watch the “Spur” music video that made it’s debut on CMT earlier this month, click HERE.

For more information about Kylie Frey and to see a list of upcoming appearances log onto: www.kyliefrey.com.