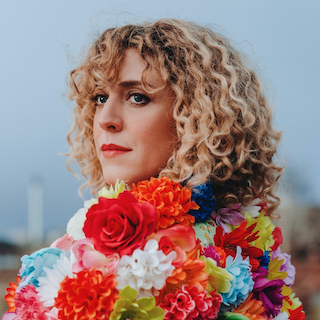 Lauren Housley is a young woman who packs the one-two punch of a powerhouse vocal and a story to tell. She returns with the long-awaited release of her third album, ‘Girl From The North’ on 23rd April 2021 through her own label Lovebird Recordings. First single, ‘Stay Awake To Dream’, is out now. The accompanying video, filmed at an abandoned airport just outside Nashville, was premiered by Americana UK today.

Wrapped in a fresh and eclectic sound, the central theme of the new record is one of rediscovering herself and her roots:

“To move forward we sometimes have to go back. I wanted to prove to myself that it doesn’t matter where you are in the world, you can make great music.” Lauren confides, “Returning to my hometown of Rotherham a few years ago, after leaving at the age of 18, seemed like the most bizarre decision I’d ever made. It was never part of my ‘plan’ but it has in fact enabled me to reassess my life and career goals and move forward in a way that feels true to myself”.

Lauren’s style remains grounded in the roots world, with a hint of one of her childhood influences – “good Pop songwriting”. ‘Girl From The North’ showcases 10 songs written by Lauren and her husband and long-time musical collaborator Thomas Dibb, spanning a variety of styles from the ethereal Americana of ‘Stay Awake To Dream’ and ‘Sing To Me‘ which Lauren describes as an “adult lullaby”, right through to the psychedelic-folk production of ‘Breakdown’ and ‘Guaranteed Sunshine’, a summery anthem reminiscent of early Sheryl Crow.

Thomas comments: “This new album from Lauren is a real step up in songwriting and story-telling. She is drawing on inspiration from her childhood: growing up in the working-class town of Rotherham, having big dreams and exploring the world through her art. I hope young girls and women can listen to Lauren’s story and find inspiration in it themselves”.

The follow-up to her widely praised 2017 LP ‘The Beauty of This Life’, Lauren and Thomas started recording and producing the bulk of ‘Girl From The North’ at the end of 2019 in the studio they built underneath a food hall in her hometown of Rotherham, South Yorkshire when a proposed move to London was halted by the news that they were expecting their first child.

“We had planned to relocate from Manchester to London. Something just didn’t feel right and we decided to move back to Rotherham. When we were in our basement studio, we were totally immersed in making music. There was no wifi or cell signal, which at points was maddening, but ultimately was a blessing. It was interesting to set out on a journey of introspection and produce this album ourselves. Also, we held our wedding party in the food hall above so it holds a special place in my heart!”

Fast-forward to March 2020. Lauren had just attended Folk Alliance International in New Orleans when the global pandemic struck. Shelving the release of her new album, Lauren focussed on family life and preparing for the birth of Noah. The couple were forced to move their studio set-up into the one bed apartment in Sheffield they now called home, leaving little space for anything else let alone a new baby. Thomas mixed the full album there during the first months of lockdown – “a great way to stay sane!” Lauren adds, “one day Tom came home and said he was moving the studio into the flat that evening as he feared we were heading for a lockdown – it was announced the next day”. During that time, Lauren also broadcast a weekly live stream from her kitchen ‘Tuesday Night Live’, which drew praise from fans, peers and industry professionals alike.

After completing ‘Girl From The North’ in lockdown and now finding herself with the same backdrop as she prepares for its release into the world on April 23rd, Lauren hopes more than ever that her new music will bring a burst of light and joy to listeners in these dark times.

After a hiatus in touring, Lauren plans to be back on the road in autumn 2021. To celebrate the release of ‘Girl From The North’, Lauren and her band will play a special one-off Livestream concert – more details to come.