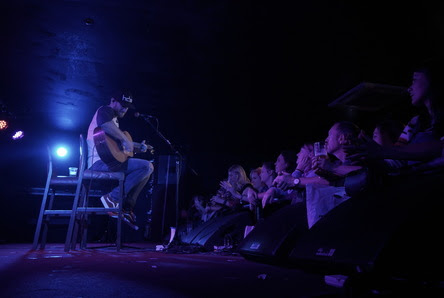 BBR Music Group artists Jimmie Allen, Lindsay Ell, Chase Rice and Lainey Wilson all toured the UK this month and were received with open arms by fans across the country. Many of the shows were part of the AEG’s Country Music Week, while others were part of the artists continued dedication to tour internationally and play for their fans in the UK. Amidst the energy of Country Music Week, it was announced that Broken Bow Records artists Dustin Lynch and Rice will be playing the Main Stage at the Country to Country (C2C) Festival in March 2019.

The dates kicked off with Lindsay Ell’s sold-out London headline show (Oct 16th); before Chase Rice took to the stage at the historic Bush Hall venue earlier this week to mark the start of his second UK headline tour, titled the Lambs & Lions Tour, with Jimmie Allen as main support for all four shows.

Sunday night (Oct 28th), Jimmie Allen closed out a two-week combined run of UK shows from the label’s roster during October, with a special performance at the ‘Bluebird Cafe’ songwriters round in London. Joining them in London was Broken Bow Records latest signing Lainey Wilson, who spent several days working with internationally-acclaimed songwriters following her debut overseas performance, before returning to the stage at AEG’s Country Music Week for a packed performance and Q&A as part of their Daytime Hub event.

Rice found time on his trip to join legendary BBC Radio broadcaster Bob Harris on stage at the CMA Songwriters Series (Oct 22nd) for a special announcement, letting fans know he’d be joining th Country to Country (C2C) Festival lineup in March 2019, for full band shows on the main stage in London, Glasgow and Dublin. It was also announced that labelmate Dustin Lynch will make his long-awaited first trip across the pond to play C2C 2019 in all cities, alongside Keith Urban, Lady Antebellum, and Chris Stapleton. Rice went on to join songwriter/producer and frequent collaborator Chris DeStefano for an acoustic rendition of current single ‘Eyes On You’, which is receiving growing airplay worldwide and has topped 65m+ streams, including over 1m in the UK alone.

All four artists received rave live reviews, while fans clamored for the engaging live show experiences. Additionally, keeping a packed scheduled, all were featured on multiple BBC Radio shows during their trip, as well as stopping in to visit the UK’s 24/7 country station Chris Country Radio. Ell also made an appearance on London Live TV, took over Fender’s social media channels and recorded an interview with Total Country TV, to air shortly after the new channel’s launch in November.

Lauded “one of the most exciting and talented young artists in country music” (Forbes), Lindsay Ell is a true triple threat; a multi-instrumentalist as well as a unique vocalist and songwriter. Lindsay played lead guitar on recent album ‘The Project’, which debuted at No.1 on the US Country Album Sales Charts.  Lauded the ‘Best Country Album of 2017’ by Billboard, The Project is produced by GRAMMY-winner Kristian Bush, of Sugarland. Recently, Lindsay traded guitar licks with Brad Paisley on his Weekend Warrior World Tour, and hit the road on Sugarland’s Still The Same Tour, before joining select dates of superstar Keith Urban’s Graffiti U World Tour, and returning to the UK in October for headline shows having been a standout artist at the O2 Arena’s C2C Festival in March 2018.

Hailing from the small farming community of Baskin, Louisiana, newcomer Lainey Wilson has as much grit in her as she does soul. She moved to Nashville in a camper trailer to pursue a career in music and has been carving her own unique place in the country music landscape ever since, already garnering early praise as “a cautious optimist with just enough scars and pragmatism to write great, universal country songs” (Taste of Country) and “one of those voices who will grab your attention and keep it” (Whiskey Riff). A natural-born storyteller, Wilson has quickly established herself as an in-demand songwriter on Music Row as part of the powerhouse Sony/ATV, landing cuts with chart-topping country artist Luke Combs and fellow rising country artist Kasey Tyndall, and independently releasing her own self-titled EP in April 2018.

This summer Lainey landed a record deal with BBR Music Group/BMG and is currently in the studio working on new material for her debut with its flagship imprint, Broken Bow Records.