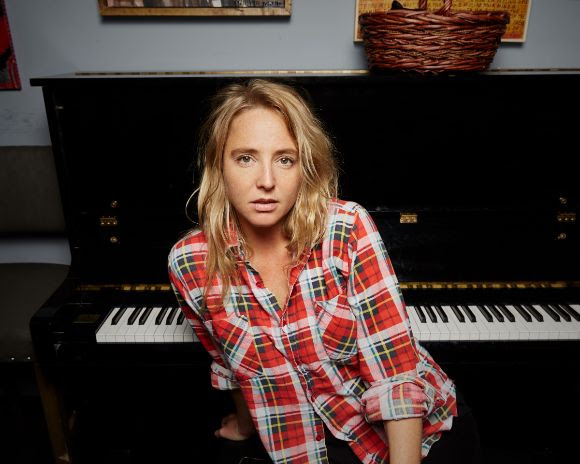 “When you take a song out of its production and strip it down to its basic elements, you get the heart of the song,” says Iowa resident LISSIE about songwriting in general. That sentiment though carries directly over to her new album When I’m Alone: The Piano Retrospective(Cooking Vinyl; release date April 5, 2019).  A reimagining of her best-loved and career-defining tunes, When I’m Alone… unclothes the songs down to their most intimate and vulnerable selves, letting her pristine voice and songwriting shine. “You find out whether [a song] can stand on its own, whether it’s a good song,” she continues. “When they come down to their basic bones, are these really meaningful pieces that stand on their own?”

For Lissie, that answer is a very confident affirmative.  From the gentle piano intro of the first track “Don’t You Give Up On Me” (from 2016’s My Wild West), it’s evident this isn’t a mere retread or reboot of past successes, but, in fact, a refashioning and recentering of her past.  She removes the driving backbeat and the bombastic flourishes from the original to expose a gentle and plaintive, emotion-drenched song that pleads and tugs.  Other songs that are disrobed include “Sleepwalking” (from 2013’s Back to Forever), “Best Days” (from 2018’s Castles),“In Sleep” (from her 2010 debut Catching a Tiger). and a heartfelt remake of Dixie Chick‘s“Cowboy Take Me Away.” Bound to repeat her track record with Fleetwood Mac covers (her cover of “Go Your Own Way” remains as her most streamed track), Lissie’s cover of “Dreams”gorgeously plays tribute to the Stevie Nicks-led song without copying it note-for-note.

The transformation of breakthrough single “When I’m Alone” (from her 2010 debut Catching a Tiger) – the first single to be released from this album – boils down the soaring pop single to a tense and emotive song that aches with heartbreak.  When she sings, “When I reach out and I only grab air / And it kills me to think that you never did care”, her immediately identifiable velvet-lined vocals take center stage and pull at the heartstrings.

“I’m seeing my romantic history over the last 10 years laid out in song, times when things were challenging, mistakes were made, my feelings were hurt, I acted badly,” she explains about the emotional toll it took to re-record these songs.  “We can use the mistakes as a lesson in order to grow. I feel like being able to go back and revisit my songs is slightly heartbreaking, but also heartening—like, I’ve survived this past decade. I get to decide when and how and what I share.”

Currently on a slight break from a stripped down acoustic tour which took her through the East Coast last month, Lissie will be returning to the road for more acoustic shows, including a handful of dates co-headlining with Joshua Radin.  It’s in this element that Lissie really shines, telling stories about the origins of songs (she’s quite the storyteller), and connecting with her audience directly.

With the announcement of The Piano Retrospective, Lissie is announcing that she will be doing a special run of piano duo shows in May featuring Jo Dudderidge from UK’s The Traveling Band on piano.  Lissie will be performing the tracks in the same format as reflected on the album in cities such as Los Angeles, DC, and NYC.

In addition, Lissie is partnering with PLUS1 so that $1 from every ticket sold on their upcoming tour will go to support Natural Resources Defense Council (NRDC) and their work to safeguard the earth – its people, its plants and animals, and the natural systems on which all life depends.

“I have been a longtime supporter of the amazing organization NRDC which combines the power of more than three million members and online activists with the expertise of some 600 scientists, lawyers, and policy advocates across the globe to ensure the rights of all people to the air, the water, and the wild.,” explains Lissie of why she chose the organization.  “In my opinion, it’s more important than ever to defend and protect our precious natural world. I thank NRDC for all of the incredible work they do! I am proud to partner with PLUS1 so that $1 from every ticket sold on this tour will go to NRDC and their work to safeguard the earth.”

This back-to-the-basics career move with her new album reflects on her own personal life in that she’s recently purchased a 50 acre farm in Northwest Iowa. Instead of immersing herself with the push and pull of city life on either of the coasts, she’s instead pulled back and returned to what’s most important: gardening.

“When you garden,” she says, thoughtfully, “it’s like all of the things you eat and grow are beautiful, and as they die and decompose, that carnage becomes the food for the plants you grow next year. When you’re out in nature and there’s four seasons, you see the cycle… It spurs my creativity to see how life becomes death becomes life. It’s this beautiful, comforting thing because it’s a constant.”

Witness the carnage and rebirth of Lissie’s past ten years with her revisit to her songs withWhen I’m Alone: The Piano Retrospective.  Perhaps you’ll put down the synthesizer and pick up a trowel.  As she sings on “Best Days”, “the best days of our life are coming for us / Waiting to be realized.”  For Lissie, her best days are being realized right now.

When I’m Alone: The Piano Retrospective will be released on April 5, 2019 on Cooking Vinyl.