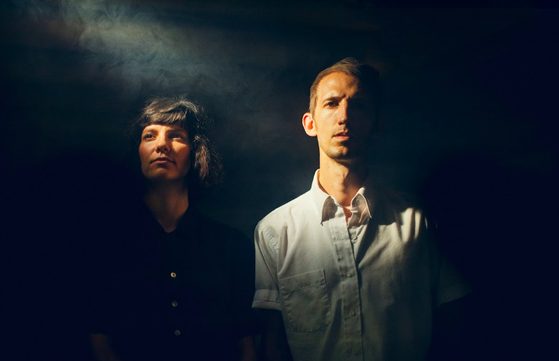 Lowland Hum has debuted a new song and video and announced their fourth full-length album Glyphonic to be released February 22. Popmatters premiered “Salzburg Summer” today, calling it “an interpretive indie folk number with layers of captivating vocals and flourishes of piano, guitar, and percussion.” The music video was created in collaboration with Pando Creative Co. and shot in the countryside near Charlottesville, VA, where the band is based. The band tells us “This song is in part an exploration of vanity, youthful frivolity, and femininity as it was internalized by Lauren’s pre-teen mind.”

Lowland Hum is an art-folk duo composed of husband and wife, Daniel and Lauren Goans. Over their young but prolific musical career, the band has garnered critical acclaim from NPR, The Washington Post, The LA Times, Huffington Post, American Songwriter and more, their lyrics noted as poetic and evocative, their arrangements praised as minimal but dynamic. Creators of the #SupportQuietMusic movement, the band maintain that in an increasingly polarized and noisy cultural moment, vulnerability is a powerful offering and restraint stands in welcome contrast to new, bombastic norms. New album Glyphonic is the purest distillation of this thesis to date, a masterful exploration of stillness in rising chaos.

Lowland Hum are a dedicated touring act, existing on the road nearly 200 days out of the year. The pair just completed an East Coast run with Horse Feathers and in recent years, have played alongside the likes of Josh Ritter, The Oh Hellos, Jesca Hoop and more. They are known for cultivating meaningful connections with fans, crafting customized-to-order “songlets” through their own Send-A-Song service, passing out handmade lyric booklets at shows, and engaging audiences in unconventional Q&As. In every part of their art, these indie pioneers are committed to the human touch. Full headline tour to be announced.

“Sincerity, community, and beauty are how I think of Lowland Hum … hushed harmonies and aural paintings.

It’s a sound that makes them a quiet Sunday-morning favorite.” – Bob Boilen, NPR

dramatic tension that makes the music sound bigger than its individual parts.” – The Washington Post

“In this frantic, fast food, Facebook world, Lowland Hum draws us into a sanctuary where we can really feel, and dare to be human, with all the naked vulnerability that implies.” – No Depression

It’s 5:15 in the morning in a historic apartment building in downtown Charlottesville called The Pink Warehouse. Lauren and Daniel Goans, who you will know as the married, world-traveling, singer/songwriting folk duo Lowland Hum, are making their fourth full-length record, Glyphonic, in their studio apartment on the top floor. On top of a bookshelf above the window, there’s a plastic bin collecting black water that drips through a crack in the roof. (Don’t tell Daniel’s mom; we don’t want her to worry.)

The reason the Goanses are awake so early is to track guitars for their new album before the rest of Charlottesville rises. They’ll continue to track throughout the day, taking breaks only by force of noise intrusions: construction, trucks, and the quaking of the entire building as trains pass on the tracks within an arm’s reach of the back stoop. These early morning hours will prove dramatically valuable for the quiet they afford.

People are always walking
across the tracks behind our building;
there’s always the feeling that so much is happening.

If there’s a better image to set the stage for Glyphonic, I can’t imagine it. As the world has continued to grow louder around them, Lowland Hum has spent their career refining the particular power of their self-imposed restraint. Glyphonic is the purest distillation of this thesis to date, setting about the difficult work of finding stillness and meaning in the midst of chaos: a collection of quietudes created and savored among all this present noisiness. I mean our noisiness, of course, about which plenty has been written, plenty of noise about the noise has been added (An internet search for the term “information overload” will return over 90,400,000 results in .43 seconds). You and me, dear reader, that’s our lot. And we don’t tour roughly 200 days out of the year.

Maybe
when we crash
at home, we can sit outside
under white sheets—
let our minds breathe,
digest the feast, maybe…

The first sounds you’ll hear on Glyphonic herald a subtle shift in the sonic aesthetic of the duo: two voices singing the same note, mixed in at even volume. Daniel and Lauren will proceed to sing in parallel like this on much of the album. It’s the sign of a singular, unified vision, won from years of navigating the push and pull of two distinct minds seeking to create a cohesive voice without losing the specificity of either. The textures in these recordings are diplomatically woven, each element featured without competing to be heard.

Much like Lauren’s stunning collage-based album artwork (and the honest-to-God log cabin that Lowland Hum relocated to after completing Glyphonic), the album builds a home for its listeners in layers. Daniel’s rhythmic guitar work articulates a motive that runs steadily through these eleven meditations on youth, touring, marriage, trust, privilege, and more. It functions as an orientation device—for the listener, sure—but also, I suspect, for Daniel and Lauren. There’s a sense in these songs of a grasping for constants as charms against the transience of life.

I am slow and it’s high time I am slowed down
to feel the cost of all my movement.

Glyphonic features the Goanses’ finest songwriting, with images specific enough to ground the listener in their worlds, yet strange enough to stir. The songs move fluidly from exterior observations to interior examinations, brought to life by a consistent run of the duo’s best vocal performances (and, in Lauren’s case, most prevalent; she takes the lead on six of these eleven songs).

Glyphonic is Lowland Hum’s fourth full-length of original material, following the 2017’s Thin. The band spent the last two years on the road in both the US and Europe with the likes of Josh Ritter, Penny and Sparrow, and The Oh Hellos. Over an expansive career, they’ve earned critical praise from NPR, Huffington Post, American Songwriter, The Washington Post and more. In 2019, Lowland Hum will embark upon a headlining US tour in support of the new album.