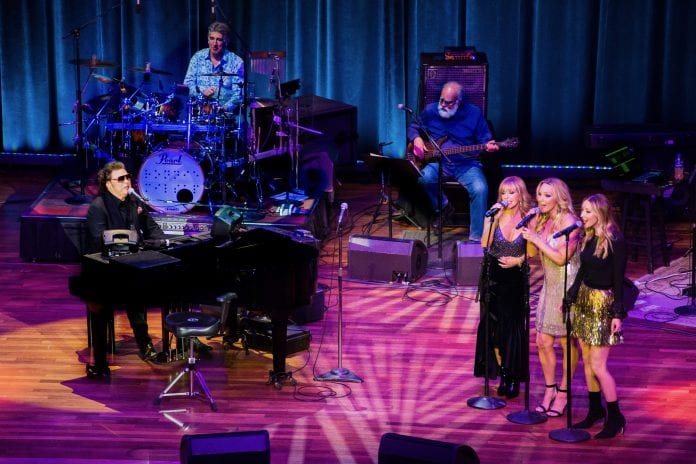 Nashville, Tenn. (February 5, 2019) — Family trio Lucy Angel is celebrating their recent Ryman Auditorium debut alongside legendary artist, Ronnie Milsap. Emily, Lindsay, and Kate Anderton are featured on Milsap’s “Happy, Happy Birthday Baby” from his recently released The Duets album. The ladies joined Milsap at the Ryman Auditorium on his birthday to perform the duet to a sold-out crowd.

The trio whose ‘impossibly close, God-given family harmonies‘ (Pepsi.com), put them on the map in country music, are honored to be a part of “The Duets” alongside Milsap and many other chart-topping acts.

“Ronnie’s music carries so much nostalgia for us,” said Lucy Angel. “It was literally a dream come true meeting Ronnie, let alone recording “Happy, Happy Birthday Baby” for The Duets album. The first time we met Ronnie, we were singing around his piano and all three of us started crying as soon as he started singing! We were like… pull it together girls! Just when it seemed things couldn’t get better we found ourselves making our Ryman debut and sharing the stage with our hero, Ronnie Milsap. It was magical…. truly a night we will never forget. We are still on cloud 9.”

Following their AXS TV documentary, Discovering Lucy Angel in 2015, the trio hit No. 51 on the Billboard/Mediabase country chart with  debut single, “Crazy Too.” They have since opened for artists including Jake Owen, Dustin Lynch, Chris Young, Kip Moore, Craig Campbell, Chris Janson, A Thousand Horses, Big & Rich, Montgomery Gentry, The Cadillac Three, Charlie Daniels and more while also touring internationally in Japan, Switzerland and China. The ‘charismatic’ (Billboard) trio were honored as the very first Western/American act to ever sing at the Great Hall of the People in Tiananmen Square, Beijing.

Since the release of “Crazy Too” as seen on ABC’s The Bachelor, the Anderton ladies have released singles, “Public Pool Party,” “Yard Sale” and “Boyz ll Men” and have amassed more than 1.8 million streams on Spotify. Building on the momentum from their recent Milsap “The Duets” feature, Lucy Angel is gearing up to release a new single in late March.