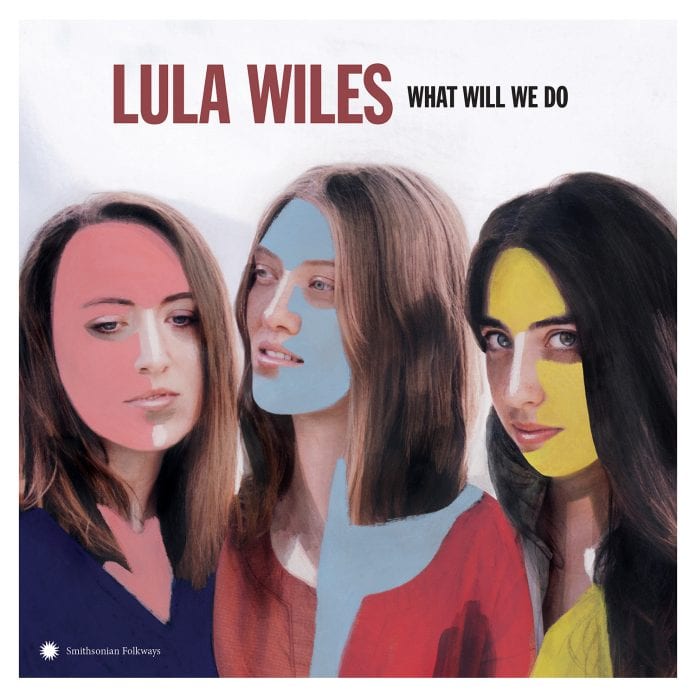 On their new release, ‘What Will We Do,’ Lula Wiles channels infectious energy and bold insight into music that strikes with purpose. Available January 25th from Smithsonian Folkways Recordings, the band’s sophomore album features songs of stinging perspective and growing resilience, along with their trademark three-part harmonies and world-class musicianship.

Lula Wiles, the trio made up of Isa Burke, Ellie Buckland, and Mali Obomsawin, came of age in Boston, in their college practice rooms and the city’s lively roots scene. In 2016, the band self-released ‘Lula Wiles,’ a sensitive, twang-tinged collection of originals. Since then, the band has toured internationally, winning fans at the Newport Folk Festival and the Philadelphia Folk Festival, and sharing stages with Aoife O’Donovan, the Wood Brothers, and Tim O’Brien.

Like most great folk records, the music on ‘What Will We Do’ draws its power from small moments captured in real time, like the scrape of pick against string or the collective inhale at the start of a verse. At its core, however, it is an album centered on powerful and transgressive songcraft. While folk music has long been a vehicle for political and social protest, the songs on ‘What Will We Do’ challenge the hallowed traditions of folk music itself: country songs that shine a light on a country’s crimes, love songs about being alone, murder ballads that challenge the standards of morality. The band fosters contradiction. They embrace the spirit of traditional American music, yet they unflinchingly call into question the virtues of the culture that produces it, while infusing that tradition with modern pop and indie-rock sensibilities.

Having grown weary of the long-standing murder ballad tradition which inevitably ends with a woman killed by a man, the trio jointly penned “Bad Guy,” which explores the morality of killing an abusive man. “If I was the bad guy, would you love me less?” the song asks, daring the listeners to judge for themselves. “Bad Guy” celebrates the shared experience of womanhood, represented by two actual sisters in the story: “For sisters know, our hearts are but the same/ They break and grieve as one.”

On “Good Old American Values,” Obomsawin, a citizen of the Abenaki Nation, takes a brutal stab at cowboy song nostalgia. “Good old American cartoons/ Indians and cowboys and saloons/ It’s all history by now/ And we hold the pen anyhow.” The song is a clear criticism aimed at the band’s own community and musical traditions. “Country music has for too long exploited Native people for aesthetic and rhetorical purposes,” explains Obomsawin.

Even the very concept of the love song is challenged in “If I Don’t Go,” in which the narrator seeks the freedom of being alone. “What if it turns out I don’t need you?/ What do I know about freedom anyhow?/ If I don’t go, how will I know?” In a tradition that routinely glorifies love, relationships, and family, the song asks why people, especially women, feel so often that they are only as worthy as the love bestowed upon them by somebody else. With all of the heartbreak and loneliness of folk songs, it would be safe to say that the concept of self-love is downright revolutionary.

The addition of Lula Wiles to the Smithsonian family is part of a long-standing label commitment to inclusion, social and political protest, and amplifying commercially underrepresented voices. Now, with the release of ‘What Will We Do,’ Lula Wiles is placed rightfully in line with some of their deepest influences, from the protest anthems of Woody Guthrie to the trailblazing songs of Elizabeth Cotten and Hazel Dickens. “Lula Wiles is a force of nature anywhere that they go,” says label associate director John Smith. “People are attracted to their energy, not only as musicians on stage but also as driven and determined people out in the world working for change.” Lula Wiles joins a budding roster of Smithsonian Folkways artists exploring the modern American vernacular that includes Dom Flemons, Kaia Kater, and Anna & Elizabeth.

While the perspectives in their songwriting are groundbreaking, their recording methodology is rooted firmly in the time-tested folk tradition of imperfection. Going into the recording sessions with engineer and co-producer Dan Cardinal at Dimension Sound Studios in Boston, the members of Lula Wiles knew how they wanted this record to feel: intimate, warm, with the edges left rough. “We really wanted this album to sound like three people making music in a room,” Buckland explains.

ABOUT SMITHSONIAN FOLKWAYS RECORDINGS:
Going into its 70th year, Smithsonian Folkways Recordings, the “National Museum of Sound,” makes available close to 60,000 tracks in physical and digital format as the nonprofit record label of the Smithsonian, with a reach of 80 million people per year. A division of the Smithsonian Center for Folklife and Cultural Heritage, the non-profit label is dedicated to supporting cultural diversity and increased understanding among people through the documentation, preservation, production and dissemination of sound. Its mission is the legacy of Moses Asch, who founded Folkways Records in 1948 to document “people’s music” from around the world. For more information about Smithsonian Folkways Recordings, visit folkways.si.edu.