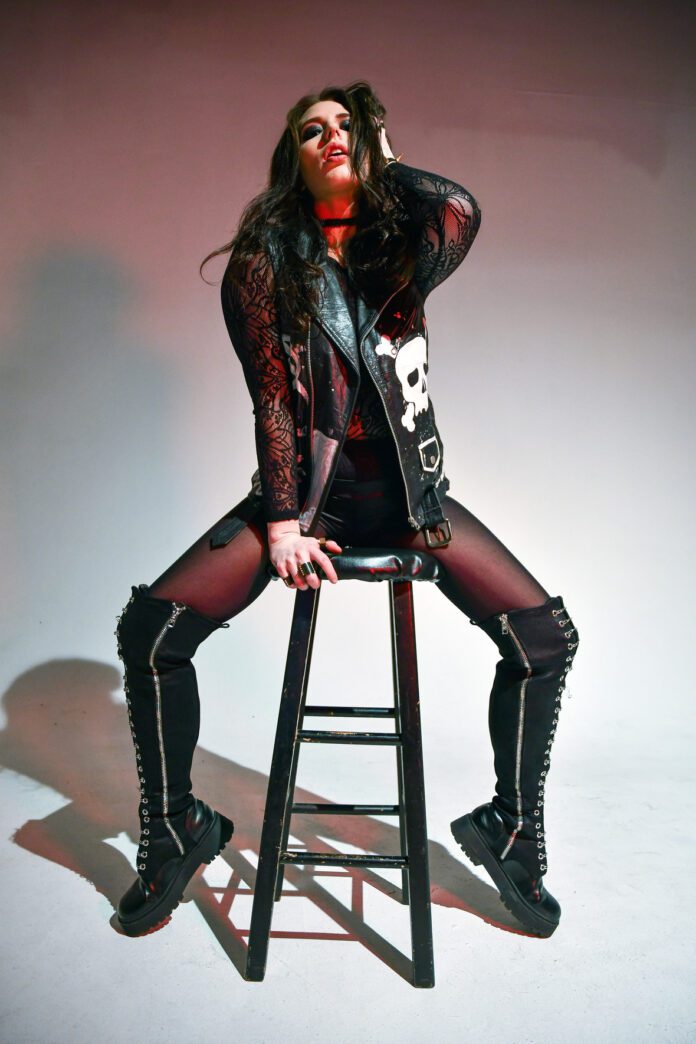 Madame Mayhem has released her new single “Inside Out” to all digital platforms and radio.

The Manhattan-born singer/songwriter and burgeoning rock icon-in-the-making has weaponized the darkness, turning it into a rallying cry for all who were ever cast aside. Songs like “Broken,” “War You Started,” “So Wrong,” “Breaking Down,” “Cruel Heart,” and “I Am More” are equal parts timeless sentiment, bare-knuckle fury, and energized urgency.

As is the new single “Inside Out” – written by Madame Mayhem and Keith Wallen. It was produced by Johnny K (Disturbed, Megadeth, Sevendust, Finger Eleven). Lead vocals is Madame Mayhem with Keith on guitars and Jason “JBomb” Harrison on drums. Madame Mayhem’s songs rival the best of Modern Rock, early ’90s emotive grunge, and nü-metal angst.

Her thoughts on the song – “‘Inside Out’ is about standing up for yourself after being pushed around by that person in your life that lives for playing games and finally gets a dose of their own medicine.”

Teaming up to write with Keith Wallen again was so much fun and Johnny K producing it really helped bring the song to life.

She adds, “Although I’m currently working on new music, I felt strongly about releasing ‘Inside Out’ now because this song keeps calling back to me. I can’t get it out of my head and wanted to finally put it out in the world!”

Earlier this year, “I Am More” hit the Top 40 on the Mediabase, BDS Billboard and BDS Indicator charts. Also Top 20 on The Foundations chart.

She has also shared stages with Sevendust, Memphis May Fire, Fozzy, Nonpoint and Doro and recently wrapped the 2 month Living Like I’m Dead US tour. This summer Madame Mayhem will be playing the main stages for The Mid-Summer Music Festival and KFML’s End of Summer Festival, both in Minnesota.

Those who yearn for the electric catharsis of loud guitars, driving rhythms, hypnotic hooks, and the strength of shared experience have a new muse in Madame Mayhem. Inside Out! 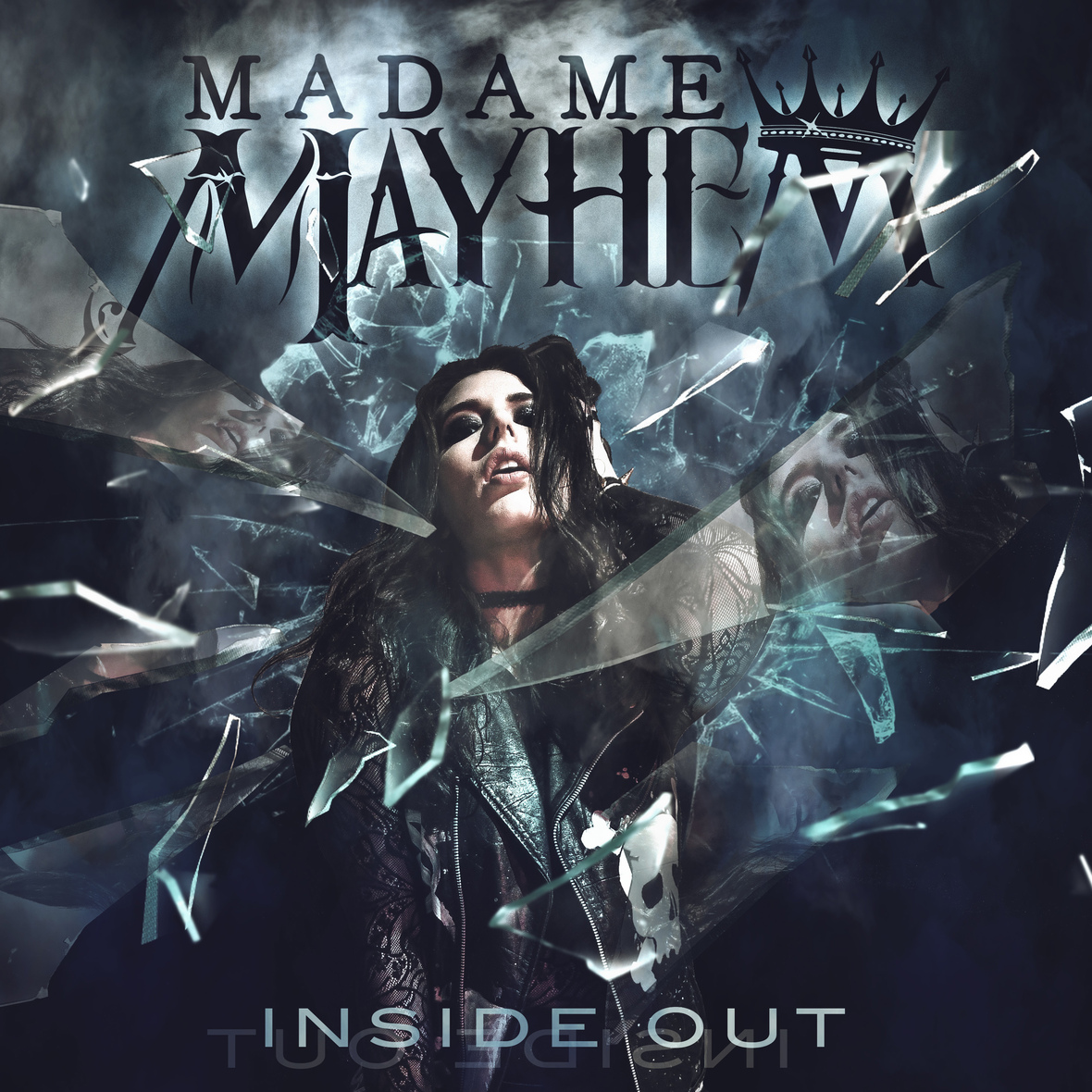 Those who yearn for the electric catharsis of loud guitars, driving rhythms, hypnotic
hooks, and the strength of shared experience have a new muse in Madame Mayhem.

The Manhattan born singer/songwriter takes charge of her own anxiety, hurt, and alienation, crushing it with sheer force of will, then channeling the remaining ether into pulse-pounding anthems, instantly connecting with anyone who has struggled.

She’s shared stages with Sevendust, Memphis May Fire, Fozzy, Nonpoint and Doro. Across three exceedingly well-received albums – Ready for Me (2017), Now You Know (2015), and White Noise (2012) – Madame Mayhem worked with Russ “Satchel” Parrish (Steel Panther), Corey Lowery (Seether), Ron “Bumblefoot” Thal (ex-Guns N’ Roses), and Troy McLawhorn (Evanescence) to name just a few. Her 2019 single “Broken” was co-written with Keith Wallen (Breaking Benjamin) and features her longtime friends and collaborators Billy Sheehan (Mr. Big, Winery Dogs, Sons of Apollo) and Ray Luzier (Korn). “Breaking Down”, which Madame Mayhem co-wrote with Brian Vodinh (10 Years) and also produced by Johnny K, was released in 2020. She once again collaborated with Keith Wallen for the February 2021 single release of “Cruel Heart”. This song was produced and arranged by Johnny K (Disturbed, Megadeth, Sevendust, Finger Eleven). The current release, “I Am More” (2022) got rave reviews at Rock Radio. Written By Madame Mayhem and Keith Wallen, produced by Johnny K and includes Keith on guitar, Billy Sheehan on bass and Jason “JBomb” Harrison on the drums.

Her music has taken her into some of the world’s best-known venues, like B.B. King Blues Club in New York, The Roxy in Hollywood, and a Grammy week stint at Nashville’s Bluebird Café, to name just a few. Loudwire premiered her “Ready for Me” music video. She’s garnered very positive press in Revolver and Guitar World. The buzz has spread overseas as well, demonstrated by profiles in long-running tastemaker publications like Rock Hard, Aardschok, and Metal Hammer magazine.

As the fashion press observed, the look is the medium and the music is the message. The self-expression inherent in goth and glam are just more colors on Madame Mayhem’s artistic palette. Black eyeliner and black leather; pink lips and sharp spikes; it’s part of an arsenal as timeless as the New York Dolls or The Runaways.

There’s no escaping the darkness. Life is full of unpleasant surprises. Real and imagined disasters, from outside forces and from within, threaten at every turn. But those who learn to control and command the chaos will triumph. This rock n’ roll badass invites each audience to become the Madame of their own Mayhem. As ASX declared, “She’s aggressive, outrageous, and operatic… And she’s ready for you.”