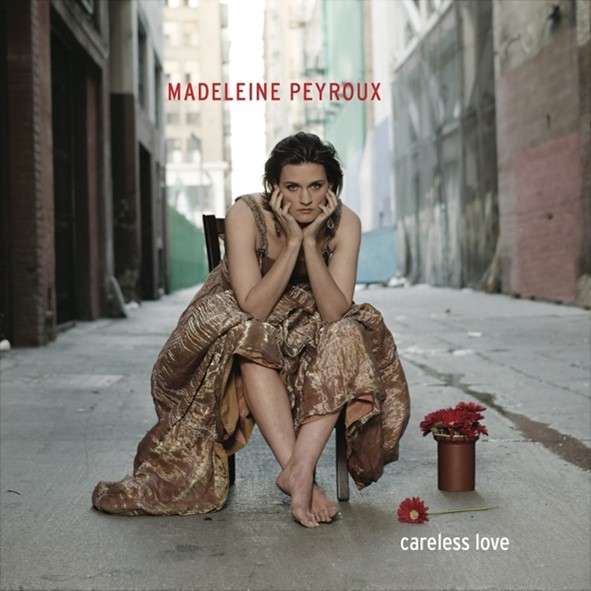 Los Angeles, CA (May 18, 2021)—Craft Recordings announces the deluxe reissue of Madeleine Peyroux‘s best-selling 2004 album, Careless Love. Set for release on August 27th and available for pre-order today, the collection includes the acclaimed, original album, plus a previously unreleased live set, captured in its entirety in 2005 at Spain‘s Festival de Jazz de Vitoria-Gasteiz. Careless Love will be available digitally, as a 2-CD set, and on 180-gram vinyl as a 3-LP set, housed in a triple gatefold jacket. Both physical editions include recently-unearthed photos, captured during Careless Love‘s original release, plus new liner notes from the GRAMMY® Award-winning journalist Ashley Kahn, who recently spoke to Peyroux about the making of the album and her triumphant performance in Spain. In addition to the widely available standard 3-LP edition, a limited pressing on translucent vinyl with black and gold marble will be available exclusively via the official Madeleine Peyroux or Craft Recordings webstores (1,000 available worldwide). Fans can get a first listen now with the instant grat. single, “Don’t Wait Too Long (live)” (stream/download here).

Additionally, to celebrate the reissue, Madeleine Peyroux is scheduled to return to the road on an extensive Careless Love Forever world tour, kicking off September 9th at The Egg in Albany, NY. The tour represents the first time Peyroux will play the beloved album front-to-back, with dates to continue through August 2022 and more global announcements coming soon. See below for the initial leg of U.S. dates and visit MadeleinePeyroux.com for ticket information.

Released eight years after her debut, Careless Love marked a new chapter for the then-30-year-old Peyroux. Born in Athens, GA to bohemian parents, Peyroux spent her teenage years in Paris, where she found herself entranced by the city’s busking musicians. By 15, the precocious singer was performing alongside them in the city’s Latin Quarter and soon dropped out of high school to tour Europe full-time. When she returned to the States in her 20s, Peyroux settled in New York, where she was discovered —and promptly signed—by Atlantic Records’ Yves Beauvais, who co-produced her 1996 debut, Dreamland.

Immediately, Peyroux caught the attention of the music world, drawing comparisons to one of the greatest jazz vocalists in history, Billie Holiday. Yet, amid a whirlwind of buzz and critical acclaim, the young artist withdrew from the spotlight.

“When I came back to New York to make that first album I was like a deer in the headlights,” Peyroux tells Kahn. “It was my first time in a studio, my first time back in America. Then 9/11 happened. Then George W. got re-elected. It was like the world was going crazy. After Dreamland I had signed with Sony and I was trying to make my second record. I was broke and I didn’t know what I was going to do next.”

In addition to undergoing vocal cord surgery, the young artist entered a period of exploration—one in which she literally and figuratively found her voice. She set out across America to reconnect with her home country, but she also spent a lot of that time in self-reflection. “I put a lot of thought into what my career means,” Peyroux recalls, “what making a record and the follow-up tour represents—the kind of music I wanted to do and the amount of work that is involved.”

By 2004, she was ready to return to the studio. Peyroux signed a contract with Rounder Records and was introduced to Larry Klein (Joni Mitchell, Herbie Hancock, Shawn Colvin), a legendary producer with whom she would form a long-lasting creative partnership. Klein’s sonically diverse background would also prove to be the perfect match for the singer-songwriter.

While Peyroux was introduced as a jazz artist, her influences spanned far beyond one genre—and the compositions selected for Careless Love showcased this versatility. From inspired interpretations of songs by Elliot Smith (“Between the Bars”), Leonard Cohen (“Dance Me to the End of Love”), and Hank Williams (“Weary Blues”), to more traditional fare made famous by Bessie Smith (“Don’t Cry Baby”), Billie Holiday (“No More,” “I’ll Look Around”), and Josephine Baker (“J’ai Deux Amours”), Careless Love offered something for every music fan.

In the studio, Peyroux was joined by a talented line-up of session musicians, including guitarist Dean Parks, keyboardist Larry Goldings, bassist David Piltch, trumpeter Lee Thornburg, and drummers Jay Bellerose and Scott Amendola. The laid-back Los Angeles sessions afforded the artist plenty of time to experiment and improvise with her fellow musicians.

Kahn writes, “Peyroux herself is in top, mature form on Careless Love—an apotheosis of that hushed, one-to-one affect she inherited from the likes of Billie Holiday, a stylistic bequest. By 2004, her way of conveying confessional expression was truly her own. She had developed an updated rhythmic pliability and an emotional depth that could explore the complexities lying beneath the surface of the songs.”

The album also included one original song, co-written by Jesse Harris (Norah Jones, Melody Gardot), “Don’t Wait Too Long.” The lilting, jazz-infused tune, in which Peyroux croons “If you think that time will change your ways/Don’t wait too long” could have certainly served as a personal anthem. It also became her signature hit. Released as a single, the song pushed Peyroux into the mainstream—topping the Jazz charts and appearing in soundtracks, TV shows, and national commercials.

Careless Love was a commercial and critical success as well, cementing Peyroux’s return to the industry. In the US, the album sold more than 500,000 copies in its first year—hitting No.2 on Billboard‘s Jazz chart and, eventually, earning a platinum certification. Rivaling the sales of a pop record, the album was also a bestseller abroad, landing in the Top Ten in the UK, and earning Gold and Platinum certifications in Europe, South America, and China.

All About Jazz hailed Careless Love as “a moody, haunting masterpiece” and “a whale of a record. Peyroux’s voice is amazing—grainy, intimate, and unaffected.” No Depression noted that “a more self-defined Peyroux sound emerges—smooth, circling around midrange notes, energized, and built on her own smart reading of the lyric, not anyone else’s patterns.” The Guardian praised its “classily produced and coolly graceful set,” as well as its “intelligent choice of terrific songs.”

For the next year, Peyroux spent much of her time on the road in support of Careless Love, recording the majority of her shows from the soundboard. Among these dates is a standout set from Spain’s Vitoria-Gasteiz Jazz Festival, captured by Basque Public Radio on July 15, 2005. “You can hear how much fun we’re having, and the people sound really happy,” Peyroux reflects in the liner notes. “I think I was pretty nervous, playing in such a prestigious festival in one of these daunting, historic-looking places that was so large. At the time, a venue holding 2000 was a lot for me.”

In addition to material from Careless Love, the set also includes a rousing performance of “Walkin’ After Midnight,” originally made famous by Patsy Cline and featured on Dreamland, plus a fantastic rendition of the Burton Lane/Frank Loesser pop standard, “I Hear Music.”

Peyroux adds, “I can’t tell you how grateful I am that we found this recording. For me, it represents the way I understood these songs at that time, how I was making music when I made Careless Love. It’s been more than fifteen years since that record came out, and I don’t think I’ve done a single concert that didn’t include at least two or three songs from it, and sometimes more. I think I’ve sung ‘Dance Me to the End of Love’ at every show. It’s part of me now.”

16 years later, Peyroux continues to record, perform, and challenge the confines of jazz through such albums as Half the Perfect World (2006), Standing on the Rooftop (2011), and The Blue Room (2013). In 2014, she released a career retrospective, Keep Me in Your Heart for a While: Best of Madeleine Peyroux, while in 2016, she released her eighth studio album and latest collaboration with Larry Klein, Anthem.

Click here to pre-order Careless Love (Deluxe Edition) on 3-LP, 2-CD and digital formats, and visit MadeleinePeyroux.com for exclusive merchandise and more information on the tour.

1. Dance Me to the End of Love

4. You’re Gonna Make Me Lonesome When You Go

4. You’re Gonna Make Me Lonesome When You Go (Live)*

1. Dance Me to the End of Love

4. You’re Gonna Make Me Lonesome When You Go

4. You’re Gonna Make Me Lonesome When You Go (Live)*

September 9 – Albany, NY at The Egg (with Joan Osborne)

September 10 – Northampton, MA at Academy of Music (with Joan Osborne)

September 11 – Alexandria, VA at The Birchmere

September 29 – Omaha, NW at Center for the Arts

October 9 – Portland, OR at Revolution Hall