Maggie Lindemann has consistently challenged her self-identity and evolved as an artist throughout a career that’s already seen her pass the billion streams landmark. Her breakthrough smash ‘Pretty Girl’ established her as a breaking pop icon before she took a reflective, goth-tinged approach with ‘Would I’ and ‘Human’.

is done being the third wheel in cinematic short film for

Her latest cut ‘Friends Go’ continues her exploration of mental health issues, but the music has shifted again with a modernist update of Gwen Stefani-style attitude and summery island rhythms. Now Maggie uses ‘Friends Go’ as the soundtrack to the short film ‘Death By Third Wheel’, which was directed by Van Alpert (Post Malone, Local Natives).

Van Alpert’s vision for the track is cinematic in scale, and captures the emotional heart of the song in a way that’s visually striking.

He commented, “My goal is making a video feel bigger than life, something that you’d only see in a movie theatre – a little escape from your life while you watch. I wanted the car to be a representation of Maggie’s heart. The car crashing, bouncing and exploding in artistic ways gives you an overall feeling of excitement. When you lose your mind from being excluded from your friends or love, your heart goes through it, just like the car.

I strayed away from the obvious storyline, with the backbone being multiple beautiful crashes where no-one gets hurt. The video is fun and surprising. It hits you over the head and gives you clues throughout of what’s coming. It was the most fun I’ve ever had making a video.”

‘Friends Go’ commences Maggie’s build-up to her first full-length project which is set to be released later in the year. It’s set to add another new chapter to a career in which Maggie has emerged as an icon of her generation, with over a billion audio streams, 5.4 million monthly listeners at Spotify, 186 million views at YouTube, 3.5 million followers at Instagram and an international array of Platinum awards. She’s also performed with Khalid, Troye Sivan and Sabrina Carpenter. She has garnered critical acclaim from the likes of Billboard, Complex, Uproxx, NYLON, Bustle, Idolator, L’Officiel as well as Paper, who named her as one of “100 Women Revolutionizing Pop.”

Maggie has been further celebrated in the world of fashion. She launched her single ‘Obsessed’ with an innovative partnership with the make-up brand Pat McGrath and recently teamed up with Skinny Dip for a sunglasses collaboration. She’s also unveiled her own merch line in the shape of SWIXXZ. 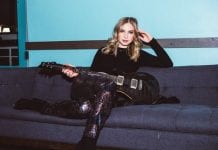