Today, Atlantic Records singer/songwriter MILCK has unveiled the incredibly personal and sentimental video for her uplifting new single “Oh My My (What A Life).” Written by MILCK herself and directed by Hayley Young, the companion visual, which premiered early today on Refinery29and chronicles MILCK’s Asian-American childhood, is now available to view on her official YouTube channel HERE.

“The music video for “Oh My My (What A Life)” is tremendously special to me because I dug deep to write this video concept, and we cast my real family, friends, and boyfriend to play cameos in the video,” says MILCK via Instagram. “The director and I also decided to use my native tongue, Cantonese, in the beginning of the video (represent!). We shot the entire video in my hometown – the house we shot in is the actual home where I grew up in as a kid, and the theater is the one I performed in as a kid.” 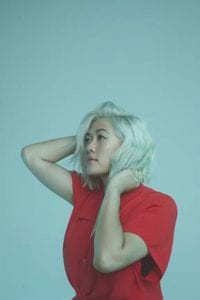 “Oh, My My (What A Life) is available now at all digital music retailers and streaming services. Listen HERE. The recently released single arrived alongside an epic performance on NPR’s renowned “Tiny Desk” series. Watch the captivating session HERE. Upon release, the song went on to receive immediate critical praise with Billboard sharing MILCK’s “Tiny Desk performance and Idolator touting the single as “joyous, triumphant” and “must-hear new pop.” The single follows the January release of MILCK’s acclaimed debut EP, “THIS IS NOT THE END,” highlighted by her breakthrough single, “Quiet.” The EP received extensive critical acclaim upon its arrival, with NPR writing, “Artists of every genre have sparked conversations about women’s liberation, political resistance and reclamation of power in their music during the past year. With ‘THIS IS NOT THE END,’ MILCK joins the chorus of uplifted voices, adding anthemic ballads to a growing list of modern protest songs.” OUT went onto say of the EP, “the woman born Connie Lim has cemented her status as one of music’s most important voices for the women’s movement.”

MILCK – who has spent much of the past year on tour, including dates supporting like-minded artists as Ani DiFranco, Amy Shark and her multiple GRAMMY® Award-winning Atlantic Records labelmate, Jason Mraz – will celebrate “Oh My My (What A Life)” with a wide range of live dates to be announced soon. For updates, please visit www.milckmusic.com/new-events/. Recently named to NBC’s “Asian America Presents: A to Z” list of emerging voices and breakout stars of the Asian American and Pacific Islander communities, MILCK took the stage to perform at the annual ACLU Conference in Washington, DC earlier this week. In addition, MILCK was recently honored by her hometown with the hanging of her portrait, alongside 12 other Asian American women, at Los Angeles City Hall as part of the city’s ASAHM celebrations.

In 2017, “Quiet” became widely known as the unofficial anthem of the Women’s March movement, after MILCK teamed up with two dozen female singers to perform acapella flash mobs of the song on the streets in Washington, DC. A video of the last flash mob was captured by award-winning director Alma Har’el and quickly went viral, drawing over 14 million plays in just two days. “Quiet” has proved MILCK’s worldwide breakthrough, a cathartic pop anthem for people of all races, creeds, and colors who have suffered and survived in the face of trauma, trial, and tribulation. MILCK released a new studio recording of “Quiet,” in November as her “musical #METOO” in light of the massive movement of women and survivors speaking out against sexual assault. On EP release day,  the LA-based artist performed a tear-jerking piano-only version of her viral anthem “Quiet” on The Today Show (watch here) and went on to headline this year’s Women’s March on NYC alongside powerful women Yoko Ono, Halsey and Whoopi Goldberg. Check out footage from the amazing day here.