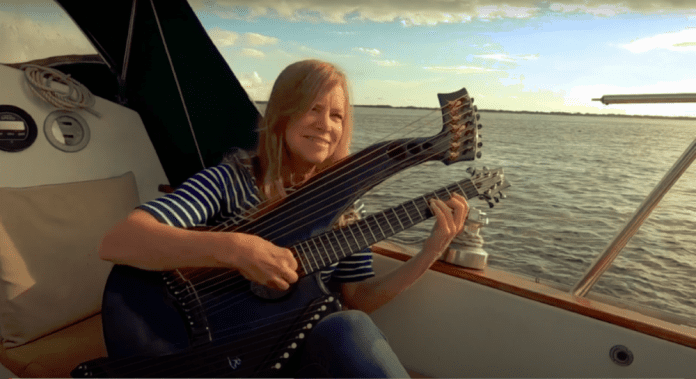 Who:          Muriel Anderson is a guitarist, harp guitarist, and composer who embraces music from all over the world. Her playing reflects a sense of grace and joy, interspersed with humor. This program includes new tunes performed on the very vintage sailboat on which the music was written.

Where:       Get your tickets here:
https://www.musae.me/riverspiritmusic/experiences/825/muriel-anderson

Why:
What inspired the sailboat idea and the music? Will this be all new music?
It was two things that came together at once. My partner Bryan Allen is a gifted photo artist and an avid sailor. He shares my life as a musician, traveling with me around the world. I also want to be an equal part of his life, so first, we created an audiovisual show with his photo art behind me, and then I joined him on a five-week sail. When Peter at River Spirit Music / Musae approached me about doing a concert in 360 degrees, I thought, “what better than to invite you all with me for a concert on the sailboat.”

I have written some new music inspired by this setting and also will play tunes from my “Acoustic Chef” on guitar and two different harp guitars.

Tell us about the sailboat and where the show was filmed?
We sailed the boat to a spot near the mouth of Fire Island inlet on the south shore of Long Island and just filmed the performance with nice daylight on the water. It also allows us to text and interact with the audience in real-time.

When you are watching the show, scroll around to see the scenery, and you might just see Bryan trying to catch a fish…