Twin sisters Sarah and Claire Bowman make up the duo The Bowmans and will release their fifth studio album, Srutiny, next month. We are pleased to premiere the Official Music Video for the emotional single “Floodwaters” from the forthcoming album.

“I felt I had to hide my truth inside to survive a Midwestern city life…” This lyric goes to the core of the song. “Floodwaters” is a song about running away from home to truly discover how hard a sense of ‘home’ is to come by.”

“Floodwaters” is the story I was afraid to speak out loud while my parents were still alive, and this whole experience of finally returning to the states during Covid has been extremely powerful as I find myself filming the “Floodwaters” video in the house I haven’t stepped foot in for four years since my mom died. It’s such a beautiful house. Like no other. And for a minute, I thought I’d never get back here. I see her everywhere, as she is fittingly reincarnated in the video through her belongings.

Mom and I never spoke about this. Now it’s too late. The song was written posthumously about a time she hurt me really badly, and I hurt her in return, by running away. She may never have forgiven me, and admittedly, I haven’t forgiven myself. I always had an intense feeling of not belonging, and she probably did too, being a New York City native living in Davenport, Iowa. I didn’t know then what I know now about living somewhere entirely foreign. You can have a home and a community no matter where you are, no matter where you’re from. But you have to find peace within yourself to find it.

Back then, I thought that the remedy to my affliction was to find a place like New York to finally fit in. But that never happened… thank goodness. “Floodwaters” is a reflection of that pivotal moment in adolescence where you disconnect from all that is familiar/normal, and become vulnerable and disoriented on your way to becoming your true self. I think everybody has this turning point in their coming of age, and mine just happened to be while boarding a Greyhound bus headed to another nowhere. 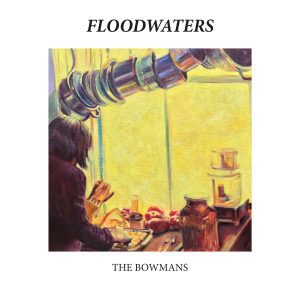 When you listen to this song, you can hear the stream of consciousness. It came to me so fast I could hardly keep up with jotting the words down on paper. It’s one long meandering verse that builds and builds intention and emotion until finally, everything breaks open at the chorus, where we’re just screaming the word “mommy.“ I didn’t waste time trying to think too much about the melody and harmony; I just let it flow out, and therefore the whole song is based on a relentless 4 chord pattern.

The whole time I was writing it, all these images came flooding back to me. It was definitely a flood in many ways, a flood of emotions, memories, visions, and it all came after hearing news that my hometown was severely flooded again. Only a couple images of the water rushing into Davenport’s downtown businesses led to this whole song pouring out. This is stuff that had been buried deep inside me, and this is how it came out.

I started working with Christian Winiker right away, and he came up with a guitar part that really brought that feeling of the water pushing past the banks of the Mississippi. So we decided to start the song with just that. Wolfi added some context with the train whistle, because that loud steam whistle is a staple of our downtown soundtrack. Matthias provided the building of intensity and emotions in the deep tribal drum sound, and the whole ensemble just helps this otherwise impossible song format to be riveting and intense. Claire’s harmony and eventual unison with me shows another layer of the story, because it was a different story for her. I can’t imagine how she felt when I left her behind, but I start to understand it in her performance. It’s intense from every angle.

I added the strings at the end because the only thing that was missing was that underlying anxiety of doing something huge without thought or care. You don’t want to acknowledge that anxiety or it’ll paralyze you. Anger took charge, though, and I fled.

Marco, who recorded and mixed the album, really wanted this song to be perfect. We worked remotely during lockdown, and this song just became a beast. The beast it was meant to be. I definitely feel very exposed, which is why I filmed with no makeup and didn’t brush my hair, just wearing a blanket and showing every crazy emotion that I genuinely feel being here now, and reflecting on this story in the context of our current crisis.

In 2016, Sarah and Claire Bowman lost their mother, Anne Corbi, an acclaimed community activist, brilliant legal mind, and at times, an intimidating and aggressive person. Until the time of her death, Anne gave many things to Sarah and Claire: compassion for those less fortunate, a formal musical education, and a passion for justice; but also, she gave them each an unparalleled and relentless inner critic.

The songs on their current effort, Scrutiny, result from an unexpected side-effect of grief, empowerment. After her mom’s passing, Sarah, The Bowmans’ primary songwriter, felt liberated to finally see herself truly and speak about her life’s events, including painful childhood memories that might have otherwise remained locked away.

Scrutiny contains highly personal subject matter. Themes include family dysfunction, coping mechanisms, destructive societal norms, and overcoming mental illness—however, the music doesn’t buckle under the weight of its content. Many of the songs carry a groove and infectious upbeat choruses reminiscent of the alt-rock, grunge, and ‘80s pop that Sarah and Claire were into during their formative years. Scrutiny finds a way of being light without making light of personal struggles.

Sarah and Claire are seasoned performers. They often take audiences on a captivating emotional roller coaster ride with humorous sister banter weaved in. They had an extensive run from 2006-2011 when they lived in New York City and toured consistently in the USA and Europe, playing hundreds of shows a year at reputable venues.

During this time, they amassed a significant following and were well represented in press and on national and regional radio in several regions of Europe, the U.K., and the U.S. Bob Harris of BBC Radio 2 was a champion, and NPR’s All Songs Considered were supporters. During this time, they gained high-profile fans such as The Avett Brothers, Jim Lauderdale, Buddy Miller, Gillian Welch, and Dave Rawlings.

Before their latest release, Scrutiny, The Bowmans recorded four full-length albums. Far from Home (2007) was released on Mother West, their self-titled album (2009) was produced by Grammy-winning Malcolm Burn, Live at Powerplay Studios (2010) and Make Sure the Snow Falls (2013) featuring Scott Avett of the Avett Brothers on banjo. In collaboration with this release, Claire wrote and illustrated a children’s storybook based on the lyrics of Sarah’s songs.

The Bowmans are members of a strong community of songwriters that they’ve known since they honed their craft in New York City. Largely active in the singer-songwriter, anti-folk, indie, and Americana scenes, they have toured with and performed with Anais Mitchell, Nicole Atkins, The Avett Brothers, and My Brightest Diamond, among others. Sarah also performed in the critically acclaimed Goth band Rasputina. Among many notable performances was a show with Robyn Hitchcock at London’s Queen Elizabeth Hall and a U.S. tour with Les Claypool’s Fancy Band (Primus.)