Born out of the pandemic and due for release on October 15, The St Buryan Sessions will be the sixth solo album by award-winning multi-instrumentalist and singer-songwriter Sarah McQuaid, and is her most powerful and emotive offering yet.

Today, we’re honored to premiere the stunning music video for the track “What Are We Going To Do,” set in the beautiful medieval church of St Buryan close to her home in rural West Cornwall, where McQuaid recorded the live solo performance amongst the grand acoustic space. This unique setting showcases McQuaid’s beautiful, soaring vocals and guitar mastery. 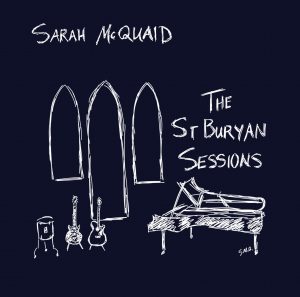 From a press release about the album:

Sensitively captured by her longtime sound engineer and manager, Martin Stansbury, with the aid of ambient microphones placed throughout the church, the sound of Sarah’s voice and music soars through the stunning acoustic space as she moves between acoustic guitar, piano, electric guitar, and floor tom drum, performing songs that span her 24-year career – from “Charlie’s Gone Home”, originally recorded on her 1997 debut album When Two Lovers Meet, to electric guitar-based pieces from her most recent studio album If We Dig Any Deeper It Could Get Dangerous.

Two previously unrecorded covers feature on the album: the classic jazz standard “Autumn Leaves”, on which she demonstrates the full dynamic range of her lush, distinctive voice, and a cover of “Rabbit Hills”, written by her dear friend (and past producer) Michael Chapman. This second piece was commissioned by Michael’s wife as a gift for his 80th birthday and sees Sarah at the beautiful grand piano that resides in the church, her compelling, heartfelt delivery revealing the depth of her immersion in the rich imagery of Chapman’s evocative lyrics.

Conceived as a concert set and including such fan favourites as “In Derby Cathedral”, “The Sun Goes On Rising” and “Yellowstone”, the album is a journey not only through a wide range of instrumentation and styles, but also through the spectrum of emotions that Sarah evokes in her performance and invokes in the listener.

The recording was filmed by Cornish filmmaker and director Mawgan Lewis of Purple Knif with the aid of Eden Sessions veteran camera operator John Crooks, and the album release will be accompanied by a full concert video. In the meantime, Sarah has been releasing a series of videos of individual songs to her YouTube channel – https://youtube.com/sarahmcquaid — where Lewis’ short documentary “The Making Of The St Buryan Sessions”, featuring interviews and song snippets, can also be viewed.

Sarah will be launching the album on its release day, Friday, October 15, with a very special benefit concert in (and for) St Buryan Church. In order to make it accessible for all in the local community, no entrance fee will be charged, but there will be a voluntary retiring collection for church funds.

“I’ve been living in St Buryan for fourteen years now,” she explains, “and it’s been incredibly heartwarming how my family and I have been welcomed into the life of the village. I kind of thought when we first moved here that we’d be shunned as ‘blow-ins’, but that hasn’t been the case at all, and I’m so grateful. I’m also incredibly grateful to have had the opportunity to record the new album in such a gorgeous space, and I really wanted to be able to give something back.”

A six-week UK-wide tour will follow the album launch and continue through the end of November. Sarah’s 2022 tour plans include Netherlands, Germany, Belgium, Denmark, Ireland, and the USA.