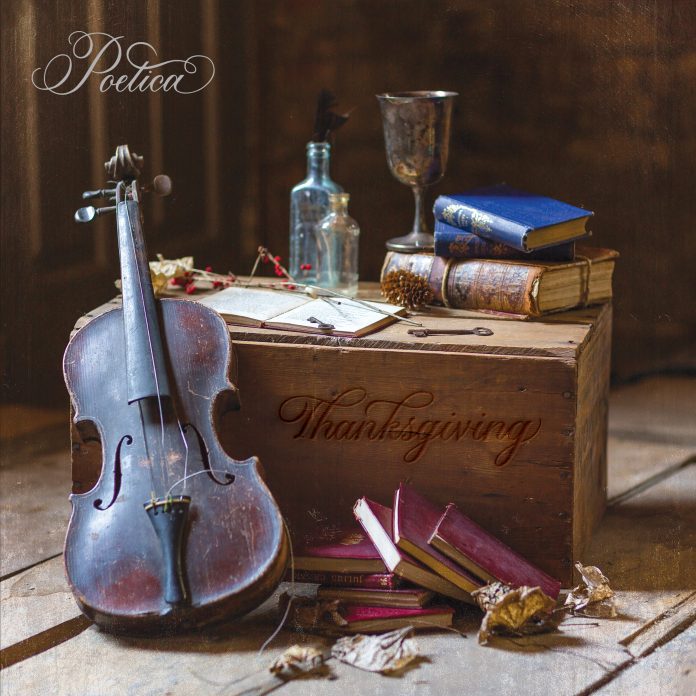 Multi-instrumentalist Rachael Sage has partnered with her longtime cellist Dave Eggar (Esperanza Spalding, Duncan Sheik, Corinne Bailey Rae) on a beautiful new spoken word project called Poetica and we’re pleased to premiere the music video for “Thanksgiving” from the upcoming album due out October 22, 2021, via her own record label Mpress Records.

Sage tells us that they began as a duo collaboration under lockdown and the project soon evolved into a full-blown, cinematic spoken word album. She produced and engineered the project in isolation with the limited gear she happened to have with her while on tour while sending files back and forth to bandmates and guest musicians from every genre. From over 200 poems written both during and prior to lockdown, Eggar—whose parents are both poetry professors—volunteered to help Sage select the 18 spoken-word pieces that eventually comprised the album, whose initial goal she admits “was to create something that would literally keep me from going insane while locked by myself in an attic for the better part of a year and a half.”

“Thanksgiving” is the debut single from my new spoken-word music project, Poetica. While I never like to discuss the literal meanings of my poems because I want them to remain open to interpretation, I will say that my collaborator and cellist Dave Eggar hand-picked this piece from over 200 I shared with him during lockdown, because he felt it was especially resonant right now. Regardless of whether you may have had a ‘professor of calm’ during isolation, everyone can relate to the concept of finding gratitude in even the most basic freedoms. By the time I finished arranging the track, I was certainly grateful for all of the incredible musicians who contributed their talents to help transform the written page into a living, retro-tinged celebration of life itself.

While I was still in the mixing phase, I reached out to my brilliant friend NLX to see if she would be interested in creating a video for it, because her beautiful work for her project The 456 had caught my eye. We share a very similar design sensibility, and it was important to me from the inception of Poetica that any and all visuals have a ‘fine art’ flair. Her aesthetic definitely fit that bill, especially as she creates every frame individually, and the result is very hand-crafted. We both also share a love of pop art, Yayoi Kusama, and very strict color palettes—so we had a natural symbiosis and I’m sure we’ll work together again!

During lockdown, I taught myself to engineer, which was initially intimidating but ultimately wildly liberating! I was living in a quirky attic Air BNB I’d ended up in when my tour came to an abrupt end last Spring, and essentially I ordered an interface, some decent speakers and a microphone, and started with some simple tracking. Gradually things got more and more layered and I was beat-boxing, playing guitar and percussion, and sending files back and forth to incredible musicians like Tennessee-based cellist Dave Eggar, Massachusetts-based violinist Kelly Halloran, New York bassist Mike Visceglia, and drummer Doug Yowell.

Recording Poetica and especially this track, I was hyper-focused and following the muse in a way that can only be described as trance-like. The beautiful thing about this particular process was that because the core was a spoken-word performance, there were no rules. I built the musical arrangement by humming vocal parts to the musicians and they would flesh them out, send back various performances, and I chiseled and edited everything gradually into what you hear…but since I’ve played with bands for so many years, I think it all still has a very organic feel and could absolutely be played live. I’m especially excited by how well the string and horn arrangements came out—and it was such a gift that trumpet player Russ Johnson was able to send me audio files all the way from Wisconsin. It was really a soul-saving process being able to create something so different this past year, from my little humble home recording rig (which I call ‘Ironing Board Studios’ because it’s literally sitting on an ironing board!). I’m already excited to start Poetica 2, after my upcoming Fall tour!

Cinematic and stylistically expansive, Poetica is a creatively ambitious musical spoken word project distilling a poetic spirit through text, voice, and music in the spirit of Leonard Cohen, Patti Smith, and Laurie Anderson. What began as a remote duo collaboration between poet/vocalist/producer Rachael Sage and three-time Grammy-nominated cellist Dave Eggar eventually evolved into a full-blown spoken word concept album, with musicians contributing from around the globe. Produced and engineered by Sage herself, Poetica aims to create connection and shared experience via the unifying power of words. Adventurous yet familiar in its intimacy, Sage’s voice is perfectly at home in the absence of typical song structure, while her musical arrangements fuse elements of jazz, classical, and Appalachian folk with surprising agility.