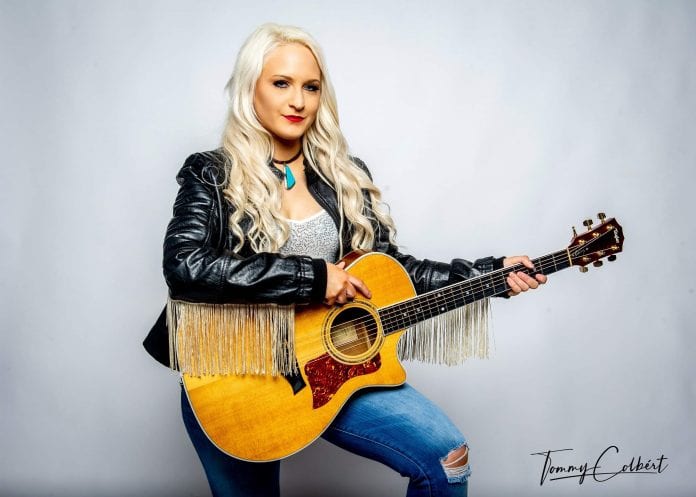 Country powerhouse Ashley Jordan recently released her newest single and music video for “Angels & Demons.” The song is a stunning ballad about the journey many of us take in learning to be vulnerable and allowing ourselves to love and be loved.

Of the single, Jordan shares, “For me, the process of growing up involved the letting go of the ideals/fairytales I had as a little girl regarding love and relationships. I had to finally accept that love is sometimes messy and confusing and that often it feels like you’re being pulled in different directions – towards the light and sometimes into the darkness. My song ‘Angels and Demons’ expresses that confusion in growing up and learning to love and be loved – and about the hope for becoming who you are supposed to be.”

Described as charismatic, honest, and a vocal powerhouse, singer-songwriter Ashley Jordan has performed her music across the U.S. for the past 10 years. Over the course of her career, she has had the honor of supporting artists such as Trace Adkins, Easton Corbin, Uncle Cracker, The Beach Boys, Jimmie Allen, The Charlie Daniels Band, Sam Hunt, Chase Rice, Rusted Root, Jason Mraz, Phillip Phillips, Christina Perri, O.A.R., Howie Day and more. Jordan has performed for audiences as large as 40,000, and in 2015, her song “Angels” received a 1st Round Grammy nomination. She is the first-ever female back-to-back winner of the coveted Boston Music Awards “Country Artist of the Year” accolade (2017 and 2018) and nominated for a third and now a fourth time in 2019 and 2020 respectively. Ashley is also a two time NashNext Finalist (top 10 nation-wide 2016 and 2017), selected both years by Big Machine Label Group and Cumulus Media.

Jordan continued to rock the music scene in 2019 with several appearances on WGBH with Jared Bowen on “Open Studio”, and later a “Live at Fraser” performance, supporting the national touring band The Ghost of Paul Revere. Jordan and her full band have also been performing high-energy shows across the states with partnerships with The New England Revolution Soccer Club and the legendary Barnyard All Terrain / Trucks Gone Wild festivals in Maine.