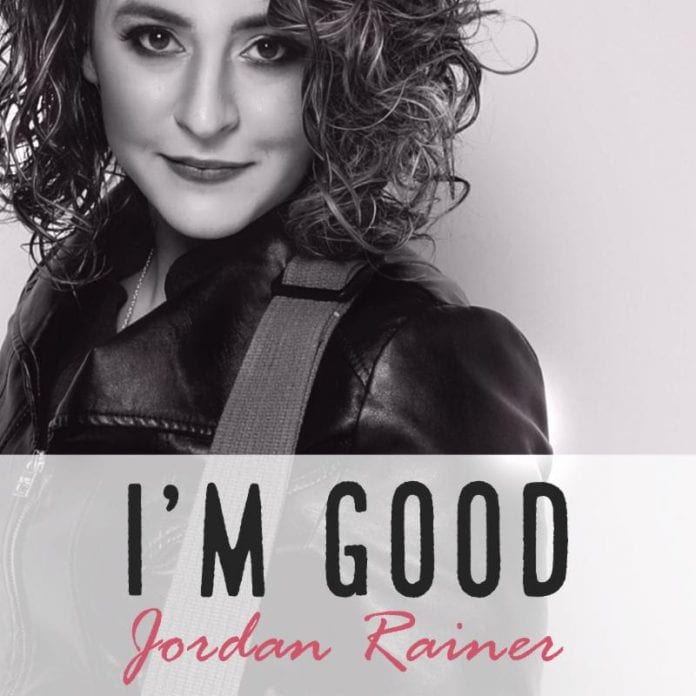 I’m good to go, got all I need, shirt on my back, and all the air I can breath. No worries far as I can see. Things can always be a little bit better but I’m doing better than a whole lot of folks I know. I’m low on trouble, high on hope. So answer someone else’s prayer Lord if you would, cause today I’m good.

Written by Rainer, Kevin Brandt (Love of a Woman), and Bobby Terry (Live Like You Were Dying), the song highlights incredible songwriting mixed with her voice, which exudes radiant tones and velvety textures. I’m Good is the first release off her upcoming EP, Learnin’ To Fly, which will be released next month.

With the support of Pepsi618, Jordan was recently in Illinois performing at venues and visiting radio stations in support of I’m Good. She is currently on tour in Colorado playing at the Mountain High Music Festival, joining artists including The Voice winner Sundance Head, Jamey Johnson, Craig Morgan, Pam Tillis, etc. on the same bill. This festival which is presented by BMI and hit producer/songwriter Dean Dillon also features some of the best songwriters in Nashville. She is clearly solidifying her skills as a songwriter after recently securing two songs, including the title track, on Sundance Head’s upcoming new record Stained Glass and Neon.

About Jordan Rainer: Raised on Christian music in Oklahoma, it wasn’t until Jordan was a teenager when she discovered country music. Enamored by the stories and guitar slinging of artists like Keith Urban and Brad Paisley, she had found her home. With musically inclined parents, she picked up her innate ability to play music by ear. In fact, she never learned to read music. She can pick up most any stringed instrument and be playing a song on it five minutes later. Though her list of conquered musical instruments is lengthy (piano, saxophone, drums, mandolin, banjo, bass, dobro, etc), she has a soft spot for the guitar which she insists, “chose her.”

In 2015, she solidified her musical journey by making the ultimate move to Music City and within a year, she was signed to Black Diamond Row Publishing. She has been continuously writing with Nashville heavyweights including Dean Dillon (Tennessee Whiskey, The Chair), Jeff Hyde (Springsteen, Record Year), Kevin Brandt (Love Of A Woman), Lance Carpenter (Love Me Like You Mean It), etc. With her intricate lyrics, masterful guitar playing and commanding voice, she is catching the attention of some of the biggest names in country music. Jordan showcases an artistic vision that will prove her to be one of country music’s keenest working storytellers, bringing honesty and raw intimate talent back into this genre.