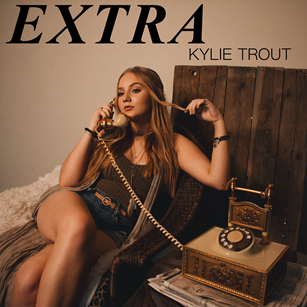 We are pleased to premiere up and coming country artist Kylie Trout’s Official Music Video from her recently released single, “Extra” from her forthcoming EP set to release in 2021.

“The “Extra” music video was such a blast to make right in my hometown of Riverside, CA with all of my real friends! It captures the visual of the song perfectly with the back and forth that sometimes happens with an ex.” ~Kylie Trout

If you’re a fan of Meghan Trainor, you will enjoy Trout’s remarkable vocals and her ability to put her emotions into thoughtful and catchy tunes. “Extra” tells the story of a past relationship that many fans can relate to—an ex who tries to go the extra mile. The writing of this song took multiple attempts. After writing the song with Jason Hamer and Mark Addison Chandler, Trout still didn’t feel like the song was quite right or complete so she ended up re-writing the song on her own. In the end, Trout says, “I love the vibe of this song, It’s kind of different for me, but at the same time, I feel like it goes with my previous songs. I feel like it’s a good mix.”

The seventeen-year-old singer-songwriter from Southern California has a way with words. Raised without her biological mother in her life after experiencing abuse from her at a young age, Trout turned to music to help process her feelings and emotions.

In a press release announcing the new single, Trout described her musical journey as her “saving grace,” saying, “Growing up without my mom, it still gets to me to this day. But that really led me to music… I feel like I had to mature very quickly when I was little because there was a lot of things going on that other kids might not understand with my mom.”

Things happen in life, and we may not like them, and bad things happen to good people, but at the end of the day, there’s a reason for everything, and I like to convey that in my songs. I hope that gets across to people who listen to the music.”