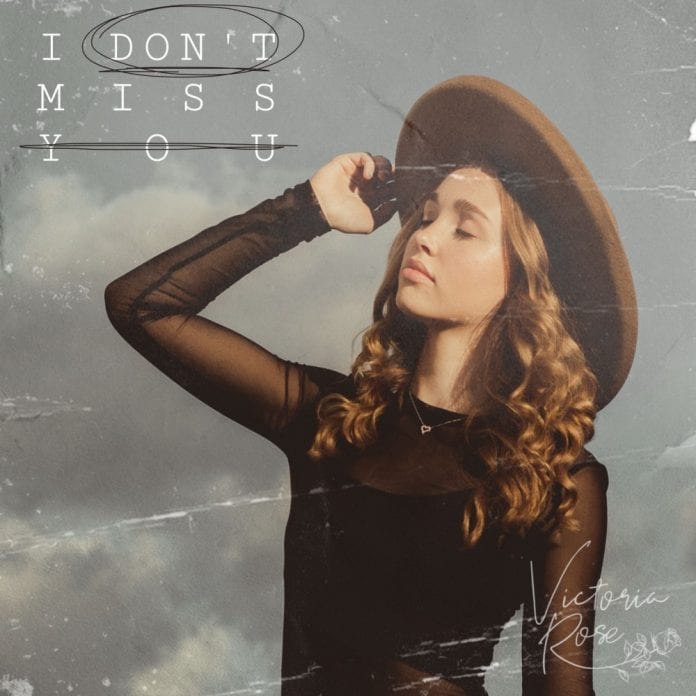 NASHVILLE, Tenn. (December 10, 2020) — Country music newcomer, Victoria Rose, is proving sometimes distance doesn’t make the heart grow fonder in her upcoming single, “I Don’t Miss You.” Co-written alongside Michael and Caroline Walker, the track will be available on Friday, January 29, 2021.

Produced by Michael Walker of DME Orlando, the stripped-down instrumentation and production showcase Victoria’s emotional vocal performance that embraces her vivacious, matter-of-fact attitude. The catchy melody and lyrics reveal her relatable and honest experience of walking away from a toxic relationship.

“I was going through social and emotional changes in my life, and didn’t realize the impact some of my friendships were having on me,” said Victoria. “One of the hardest decisions was choosing when to walk away. As much as I’d hoped for a different outcome, I knew my wishful thinking was not going to make me a better person. Oftentimes it’s best to leave the past in the past.”

Since moving from her hometown in Pennsylvania to Orlando, Florida, the songstress has been honing her craft with DME Orlando’s artist development program while attending a high school music conservatory program. Victoria is currently in the studio recording a series of singles expected to roll-out early 2021.

About Victoria Rose:
Growing up on the Monongahela River in southwestern Pennsylvania, Victoria Rose’s love affair with country music began at an early age while cruising the waters on her family boat. Blending traditional and contemporary country music, she garnered an appreciation for legendary icons such as Dolly Parton and Hank Williams Jr., along with her childhood favorites Carrie Underwood and Little Big Town.

At the age of 6 years old, Victoria began piano, ukulele and guitar lessons, and later implemented vocal lessons at age thirteen. During her early grade school years, Victoria performed in numerous choirs, musicals and talent shows where her talents were beginning to be recognized.

Her music career blossomed at the age of 12 when she was given the opportunity to perform at Pittsburgh’s Hard Rock Cafe followed by a National Anthem performance at the Monster Truck Jam (PPG Paints Arena). Since, she has received welcome to perform original sets at various music festivals such as: Bloomfest 2020 and Virtual Festival 2020.

In pursuit of honing her musical craft, Victoria’s family recently made the move to the Sunshine State, where she is currently attending a high school music conservatory program while working with DME Orlando’s Artist Development Program.

While Victoria is most certainly characterized by her songwriting ability, sassy lyrics and crisp twangy vocals, what lies beneath is the tenacity and determination that will put her on the path of success. She expertly balances young-hearted romanticism with sophistication to offer a relatable quality that country music fans alike, can latch onto. The now sixteen-year-old has released 2 singles (“Digging Your Own Grave” and “Yours”) in Fall 2020 which have accumulated upwards near 100K streams on various streaming platforms.

Currently, Victoria Rose is in the studio working to release a series of new singles anticipated to roll-out in January 2021.