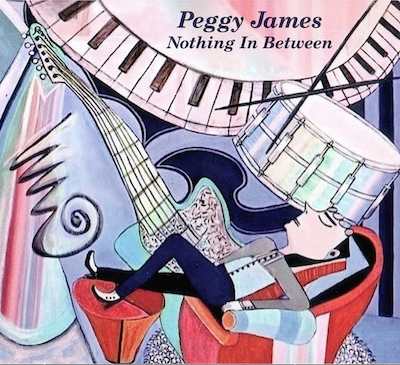 Milwaukee singer/songwriter Peggy James will release her fourth solo studio album entitled “Nothing In Between” on June 29th, 2018. Championed by veteran producer/guitarist Jim Eannelli whose meticulous attention to detail ensured that justice was served to the projects’ recording. To that end, “Nothing In Between” has all the earmarks of becoming a Peggy James favorite for new and old fans alike.

James is a prolific songwriter whose Midwestern roots and Southwestern influences are embodied gracefully within her compositions.  Peggy’s insightful lyrics counterbalance her muscular guitar-driven sound while always hinting at something timeless and rooted in bluegrass, folk-rock and country-western styles. Her songs are well-told, finely crafted stories delivered with authenticity – the creations of a mature songwriter in her prime.

“Peggy James has a lot going for her: emotive lyrics and melodies that work together in smartly crafted songs; a stunning voice operating in several emotional registers… [her music] crosses the boundaries of country, pop, and rock and rubs elbows with the kind of heartland sound associated with the Jayhawks.” – Continental Drift – Billboard Magazine

Breathtaking moments exist on “Nothing In Between” where James’ sweet pure, voice, balances vulnerability and toughness by revealing wisdom in songs that are a little bit country, a bit rock-n-roll and a lot of soul.

Peggy James was born in Milwaukee, Wisconsin but spent her formative years in the Southwest.  This desert “Americana” flavor influences all of her songs allowing her songwriting style to be both unique and eclectic. Her lyrics are honest and direct – shooting straight from the heart.  Her voice, clear and sweet, can get tough and rock ‘n’ roll with the best of them.  Peggy has been referred to as being one of a small group of premiere female singer/songwriters worthy of national attention.

She has three previous albums to her credit. Her first two were produced by well-known producer and guitarist Mike Hoffmann – “Help Me Out” and “Crossroad Moment.” Her third album “Joan of Arc” and the brand new “Nothing In Between” were produced by Jim Eannelli, a veteran musician with decades of recording experience.

Her fourth album “Nothing In Between” will be released June 29th, 2018.  In classic Peggy James style, it crosses the borders of many genres with grace. From Pop/Rock to Ballads to Country/Bluegrass, Peggy’s storytelling, melodies, and lyrics create captivating journeys.

Having performed locally and in Nashville, Austin, and Chicago, James has opened for BoDeans, Iris Dement, and Salt Creek to name a few.  From roots twang to world pop she continues to be a pleasant surprise to even the most discriminating Americana music fan.