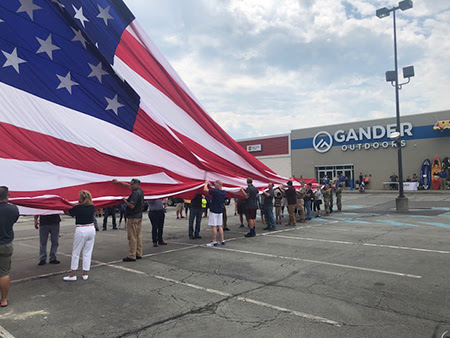 DICKSON CITY, PA – (June 30, 2018) – Gander Outdoors continued a tradition of honoring present and past members of the Armed Forces, Veterans, Police and Fireman by installing a massive 40×80’ American flag, which covers 3200 square feet and will fly on a 130’ pole. The flag was raised for the first time with staff, community members and customers. Aspiring, performer and recording artist and National Spokesperson for “Veteran’s Promise,” Dani-elle Kleha, commemorated the experience, singing a heartfelt rendition of the National Anthem.
“It was truly an honor and completely breathtaking to be a part of this incredible ceremony. The groups of men and women recognized are truly our real-life heroes, I commend Gander Outdoors for honoring them in such a huge way,” says Dani-elle Kleha. “Any chance I have the opportunity to say thank you to our Veterans, Active Duty Military, Firemen, Police and all EMS, I am humbled to be able to lend my voice in their honor.”

“It has been our vision to continue the tradition of raising these flags at our properties across the country, to show our support and appreciation to our country and to those that have sacrificed so much to keep our communities safe,” stated Marcus Lemonis, Chairman of Camping World Holdings. “We love having the opportunity to bring together local communities to celebrate our great country and the brave men and women who have fought for us and will continue raising these flags in other markets in the coming months.”

Dani-elle continues to promote her new single “Get Back Up” released in April 2018, a song that inspired her “Positive Youth Tour,” a series of live shows performed at schools in Pennsylvania’s Lackawanna and Susquehanna counties, where the concerts include segments during which Dani-elle speaks to students about following their dreams, bullying, and self-worth.