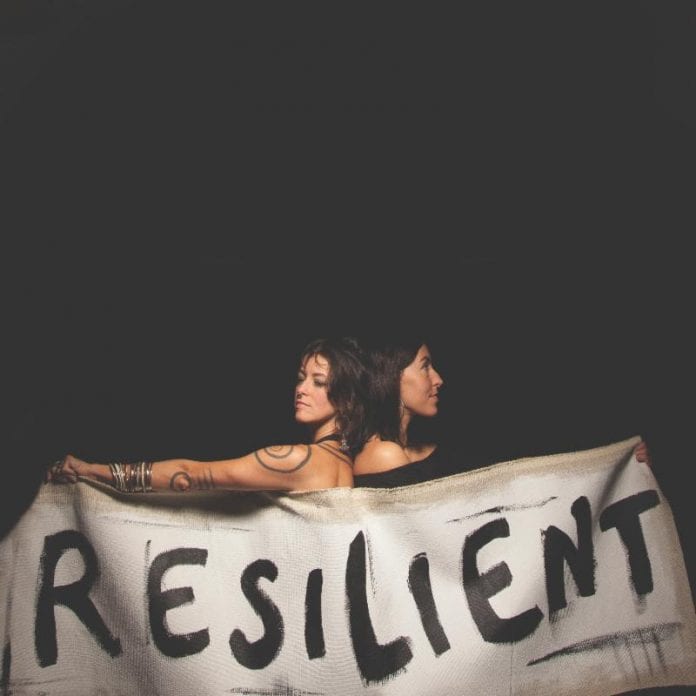 June 15, 2018 — Last month, Rising Appalachia, the Southern-based folk band lead by sisters Chloe Smith and Leah Song, released their new single “Resilient,” an anthem for seeking calm in the chaos-storm that has descended upon American and the world at large. NPR Music’s Bob Boilen championed the video, premiering it on All Songs TV calling the track an “…uplifting, original folk song for these challenging times.” Also, Rolling Stone Country named the band in their roundup 10 Country Artists You Need to Know commenting that “Resilient” sounds like “protest music for the modern age, bolstered by delicate, skillful musicianship and otherworldly vocal harmonies.” Yesterday, the band announced plans to take “Resilient” to Europe, a 2o show tour with stops in the U.K., Germany, Estonia, Finland, Sweden, the Netherlands, Czech Republic, and Switzerland. Before heading to Europe, the band will play at some of the summer’s best festivals including Winnipeg Folk and Pickathon. In July, the band will share a bill with String Cheese Incident at the oft bucket-listed Red Rocks Amphitheatre in Morrison, CO.

The band looks forward to taking the healing power of music and of “Resilient,” a song written while touring the Pacific Coast after the United States 2016 presidential election, across the pond in August and September. Chloe notes that the song was written because “I needed to hear those very words myself… to remind me to be my highest self in the face of chaos and adversity, and to use my platform to encourage others to do the same.” She continues, “…honestly, with so much animosity in the country, it was challenging to muster up the energy for the public every night on stage. There was a deeper need to internalize and be more private, to sit with the bones of our work and re-envision what we would be doing in the years to come.” The world at large can benefit from and connect with a song like “Resilient,” which is exactly why the band will tour Europe this summer.

As fate would have it, the tour that followed the 2016 presidential election, dubbed the ‘Resiliency Tour’, led to linking up with the International Indigenous Youth Council who invited Rising Appalachia to perform at the centerfire for a few days in Standing Rock after the water cannons were blasted at peaceful water protectors– the irony palpable. Chloe points out that “…honor was not broken despite the pipeline going through. The whole world witnessed the resilient power of that movement, we too remembered our place in the turning of the tides.” The following month of tour was both rich and healing for Rising Appalachia; full of community dialogue, meet and greets, and honest connection through story and song– the songwriters reminded of what it means to be resilient, and were returned to their original shape after being bent and broken.

“Resilient” reveals both vulnerability and strength in the search for that which can’t be silenced. Leah comments, “After everything that has happened in this past couple of years, and is still happening, we need to remember that we the people are resilient, and can become more so. To live with hope in a time where apathy is rampant–even excessive– in a great act of resistance. What we choose to bring into our focus in this life will greatly affect our very own reality let alone the world around us.”

Longtime allies and defenders of indigenous rights, social justice, and ecological protection, it’s no surprise that with “Resilient,” Rising Appalachia captured the angst and helplessness oft felt by both victims and activists. The track speaks to the soul in poetic honesty, backed by banjo and bodhran, urging listeners to get back up again and to find pathways of strength and empowerment when confronted with conflict. When rooted in compassion and education– we can become resilient. When we listen more and talk less– we can become resilient.

Their sound and message, as revealed in the newest single, “Resilient,” suggest that voices and traditions brought together through song, may be one of the saving graces to a world in distress. And in an effort to bring more voices and traditions together, the band will continue into Europe; “widening our circle,” as noted by the sisters on Rising Appalachia’s Facebook post announcing the tour. In a time when the fabric of community and culture often appear to be unraveling, their interweaving of music and mission, old traditions with new interpretations, creates an atmosphere of contagious hope and bliss.