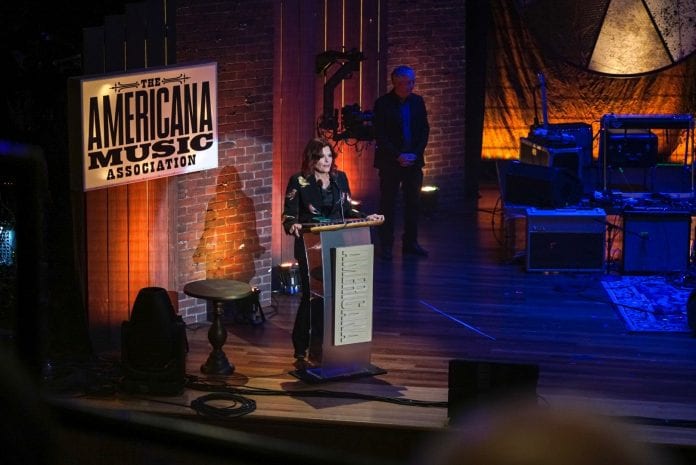 Last night at the Americana Honors & Awards at the Ryman Auditorium in Nashville, TN, Rosanne Cash received the “Spirit of Americana” Free Speech award, presented in partnership with the First Amendment Center.

The legendary artist took the stage to celebrate her award and performed a moving new song entitled “Everyone But Me” from her forthcoming album ‘She Remembers Everything,’ out this fall on Blue Note Records. ‘She Remembers Everything’ is the follow up to her 2014 record ‘The River & the Thread,’ which earned three GRAMMYs including Best Americana Album.

Rosanne was introduced by friend and head of Blue Note Records Don Was, and she spoke passionately about fair compensation for artists, women’s equality, and gun control. Rosanne threw her support behind the Music Modernization Act, saying, “we are the premier service industry for the heart and soul,” and underscored her stance on gun control, saying, “the killing of children in schools should not be collateral damage for the 2nd amendment.” Her remarks earned four standing ovations. Rosanne’s father Johnny Cash, who passed away fifteen years ago yesterday, was the recipient of the inaugural “Spirit of Americana” Free Speech award in 2002.

Rosanne is an outspoken advocate for gun control, and last year following the mass shooting in Las Vegas, she wrote an op-ed on the subject for the New York Times. She is also a fervent supporter of intellectual property rights and is a board member of the Content Creators Coalition (C3), a membership-based, artist-run non-profit advocacy group representing creators in the digital landscape. She wrote an opinion piece in that capacity earlier this week, for MusicWeek. On September 20th, Rosanne will host an evening of conversation and music rallying for gun control at St. Luke’s church in New York City, alongside author and Studio 360 host Kurt Andersen, Stop Handgun Violence founder John Rosenthal, and singer/songwriter Mark Erelli.