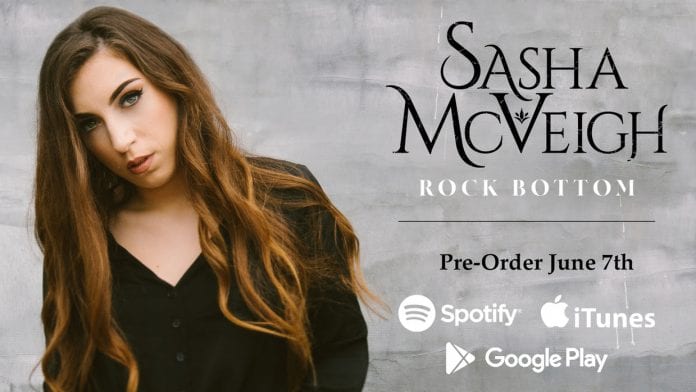 Recorded in Nashville and produced by the GRAMMY® award-winning, Mark Lambert (Leon Russell, Elton John, Kacey Musgraves, Dolly Parton, Merle Haggard), “Rock Bottom” is paradoxically a song of great triumph and a testament to using life’s painful experiences as building blocks for growth. The UK-bred musician captures not only her vulnerability but her confidence and strength in this lyrical tale. “‘Rock Bottom’ isn’t strictly a song about heartbreak,” states McVeigh, “It’s about understanding that sometimes you have to hit rock bottom in life to realize what you have and that it’s those moments of utter despair that can shape us into the people we are. We all hit rock bottom, it’s nothing to be ashamed of, if anything it’s empowering to know you survived it.”

Sasha McVeigh found her roots in country early on composing her first song at the tender age of twelve. Originally from the countryside of Hereford, United Kingdom, McVeigh’s drive, savvy and talent eventually launched her on a trajectory that would land her in Music City six years later. Drawing from country, pop and R&B influences such as Shania Twain, Dolly Parton, Taylor Swift, Lady Gaga, Adele and Amy Winehouse, Sasha McVeigh has performed on stages across the globe earning her spot on BBC radio, performing on “Under The Apple Tree” hosted by Bob Harris, embarking on a full U.S. tour and being hailed as UK Country Music Award’s “Female Vocalist of the Year.” Get an inside look at the woman soon to be taking over the country music scene. For more information on Sasha McVeigh and her new single “Rock Bottom” click here.

Check out Sasha McVeigh at this year’s CMA Fest, June 6-9. Schedule below:

“Rock bottom became the solid foundation on which I rebuilt my life.” — J.K. Rowling