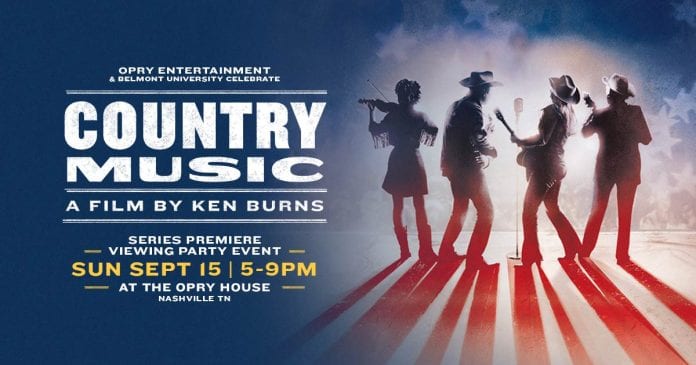 NASHVILLE, Tenn. – Opry Entertainment along with Belmont University, will host a viewing party in celebration of Country Music, a new eight-part, 16-hour documentary by famed filmmaker Ken Burns from 5 – 9 p.m. CDT on Sunday, September 15 at the Grand Ole Opry House. In addition to a screening of part one of the documentary, the evening includes a pre-event reception and program, and a special 30-minute performance from Grand Ole Opry members Old Crow Medicine Show.

“As the stewards of the Grand Ole Opry and Ryman Auditorium where so many of the unforgettable moments featured in this film took place, we are thrilled to host this event and support access to quality programming,” said Scott Bailey, president of Opry Entertainment Group. “Like many of our partners in the Nashville community, we have eagerly anticipated the premiere of this film, and we hope it inspires everyone who watches to visit Nashville and experience this one-of-a-kind city for themselves.”

“We are thrilled to be working with Opry Entertainment Group to bring this exciting opportunity to our viewers and other country music fans,” said Kevin Crane, NPT’s president and CEO.

The film follows the evolution of country music and its players over the course of the twentieth century, as it eventually emerged to become America’s music, focusing on artists such as Garth Brooks, the Carter family, Johnny Cash, Loretta Lynn, Willie Nelson, Dolly Parton, Hank Williams, and many more. The film is directed and produced by Ken Burns; written and produced by Dayton Duncan; and produced by Julie Dunfey—Emmy-award winning creators of PBS’s most-acclaimed and most-watched documentaries for more than a quarter century, including The Civil War, Lewis & Clark: The Journey of the Corps of Discovery, The National Parks: America’s Best Idea, and many more.

“Ken Burns is a master storyteller who brings history to life in powerful ways,” shared Belmont president, Dr. Bob Fisher. “By selecting country music as his most recent endeavor, he brings renewed attention on the art form and the region that employs and supports so many Belmont alumni. We are honored to help underwrite this film and to sponsor a Nashville premiere at the Grand Ole Opry House, which helped birth this amazing genre.”

Learn more about the PBS series at the official website: www.pbs.org/kenburns/country-music or discover more about country music at www.opry.com/countrymusic.