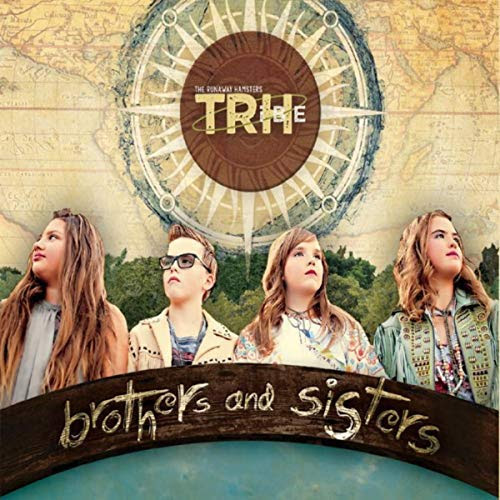 Young sibling pop/country group The Runaway Hamsters (TRHibe) continue to build on their success with the release of their brand new EP Brothers and Sisters. Each of the songs on their third studio project includes the signature stamp of honest, heartfelt music fans love. Though, as the group is recognizing their own evolution and beginning to also use the name TRHibe – their music is growing with them.

Encompassing a common theme of inspiration and hopefulness, this EP delves into many real-life themes sung through age-appropriate lyrics and memorable melodies that will have listeners of all ages singing along. The songs relay messages of togetherness and positivity including the fan-favorite title track Brothers and Sisters and the follow-your-dreams inspired lead single, GO! Ballads, One and One and Water explore emotions of loneliness and bullying while Nothing’s Sweeter Than This and Wish All Day mix in love and hope with a dose of wit. This eclectic and cohesive collection of songs is sure to leave fans wanting more.

About The Runaway Hamsters: This group consisting of Isabella and her triplet siblings — Abby, Gabby and brother, Riley — has accomplished a lot relative to their age. Best known for combining their musical talent and huge hearts, they create music that is original, engaging and heartfelt. This effervescent group started in early grade school and gained notoriety when they used both their musical and songwriting abilities to raise money, which helped the hospital caring for a second-grade friend with cancer. Since then, they have continued to use their talent, big hearts and music to help others.

The Boise, Idaho natives have performed from Nashville to LA, opened for Andy Grammer, took part in The National Finals Rodeo Cowboy Christmas in Las Vegas for the past two years, appeared on numerous TV networks, performed on WSM-AM (home of the Grand Ole Opry), been submitted twice for a Grammy consideration in the children’s category, played the famous Bluebird Café and participated in CMA Music Festival for the past few years where they met fans, signed autographs and performed. All of their success stems from their hard work and the fantastic team they have in their corner. This includes working with Grammy-nominated producer Kent Wells in the studio and Roman White (2009 MTV Music Video Award for Taylor Swift’s You Belong With Me and 2007 and 2008 Director of the Year) on all of their official music videos. They are gearing up to release a brand new music video for their current single GO! which will be released soon. With over 35k followers on Facebook and over a million views on their YouTube channel, the hamster wheel continuously spins with the Hamstercast, a free podcast to inspire, relate and positively influence fans of their age with their own personal stories and views. It is available for download on iTunes.