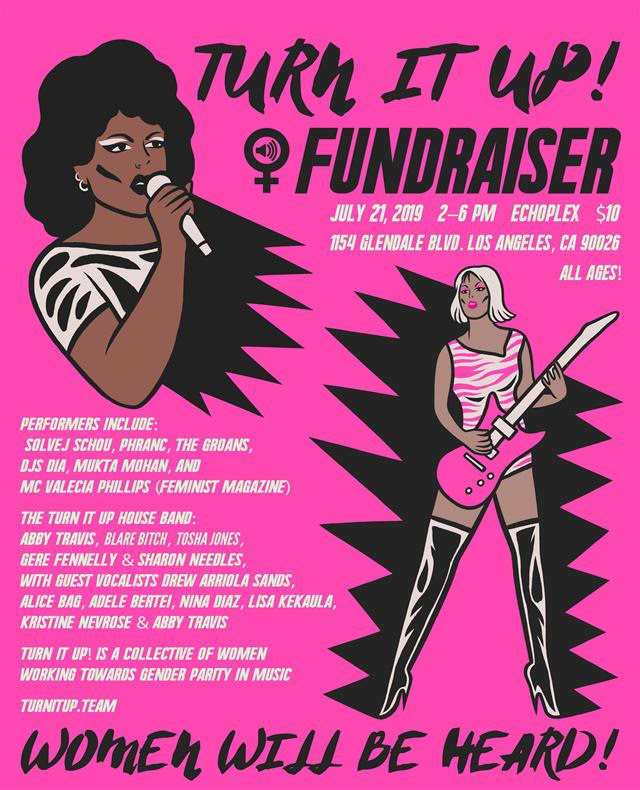 Tickets for the show are $10 and available HERE. It is open to all ages. The Echoplex is located below The Echo, enter through the alley at 1154 Glendale Blvd. Facebook event page HERE.

Solvej Schou, a fierce feminist musician, political activist, and journalist, will hit the stage performing songs from her new album Quiet For Too Long. Schou, who is a member of the organizations steering committee explains “Turn It Up! is a collective of strong and creative women in music—from musicians and journalists to audio engineers, visual artists and radio and podcast hosts. I’m VERY excited to play this very first fundraiser for Turn It Up! with an incredible, diverse and talented group of women. So many times as a musician, I’ve been the unicorn woman in the room, without equal representation of female artists. This event is about supporting women and girls in music as a community, in person, with our voices loud.” Schou’s music showcases a raw and bluesy rock ‘n’ roll vocal strut with guitar inspired by Janis Joplin, X, Pretenders, Etta James, and Bikini Kill. She has written for The Associated Press, Entertainment Weekly, The New York Times, and The Los Angeles Times and interviewed legendary artists including Aretha Franklin, Karen O, Katy Perry, Patti Smith, Ringo Starr and Jimmy Page. She contributed essays to the 2018 book Women Who Rock: Bessie to Beyoncé- Girl Groups to Riot Grrrl.

Nina Diaz will also perform. Her career was nurtured early on by rock’n’roll icon Joan Jett, who signed Diaz’s activist indie rock group Girl In A Coma to her label, Blackheart Records, and paved the way for the band to open for Morrissey, Tegan and Sara, Social Distortion, and to earn multiple Independent Music Awards. Diaz’s political activism and performance art continue to hold strong, with her recent, acclaimed performance in Evangeline, the Queen of Make-believe at the Plaza de la Raza’s Margo Albert Theatre in Los Angeles. The play was co-created by Louie Pérez (Los Lobos), Theresa Chavez (About Productions co-founder who also directs), and Rose Portillo (Zoot Suit). Diaz says “Alice Bag approached me with the idea of joining and after researching more I totally stand behind the mission. Time to take over and make people aware of Turn It Up! It’s a fresh organization for me to work with but the idea behind it is a familiar one. I’ve been in the music industry since I was 13 years old. Starting in an all female band I know what it feels like to be held in a corner and instantly judged before a word came out of my mouth. Once my voice was heard sometimes their tone would change, especially by males in the industry. I love that Turn It Up! allows women to have a platform to grow together and shine.”

Far from quiet or restrained, the politically-minded power singer and bassist Abby Travis of Sumo Princess has been recruited to be a member of the Turn It Up! house band. Travis has toured with and played alongside music legends since the early 1990s, including Cher, The Go-Go’s, Beck, Elastica, KMFDM, Eagles of Death Metal, and Masters of Reality. Her career is punctuated by historic performances, such as her show with U2’s The Edge, Juliette Lewis, and Rage Against the Machine’s Brad Wilk at the 2017 Women’s March in downtown L.A. Travis enthuses “I had gone to a meeting of Turn it Up earlier in the year and found it informative and engaging with a very diverse group of women featuring not only musicians but also publicists, engineers, DJs, and podcasters. It was great to hear so many diverse voices. I told them I was eager to help out in anyway I could. Adele Bertei asked if I would play in the house band and I said yes.”