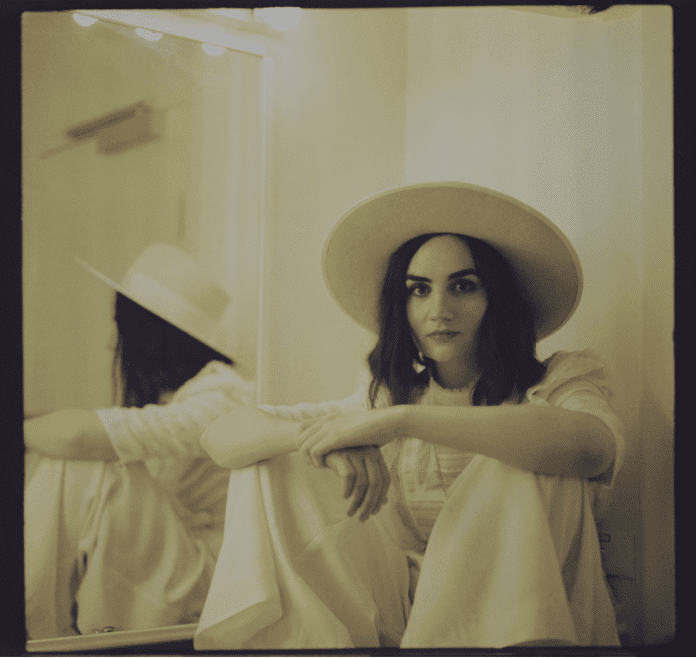 Following sell-out shows in the US, UK, Europe, and Australia Meg Mac releases her new mini album ‘Hope’; a powerful set of thoughtful and at times deeply personal missives.

Meg explains, “The songs on ‘Hope’ are influenced and informed by what was happening around me at the time of writing and recording. Music is always filtering through and though not directly influencing my songs they are somehow informing them. I was listening to Nina Simone’s ‘Piano’ album, Gill Scott Heron, Sam Cooke, and Patti Smith; powerful forces which impact on one’s sensibilities. There’s something about the strength, power, attitude, and values of these artists that I connect with”.

“This record was also indirectly informed by my past; I’d been reflecting on where I come from; particularly my Irish background, the music and singing that constantly filled my home – Irish music, soul music, Bob Dylan and Van Morrison were filtering throughout those early years. Then while I was writing in New York I read Patti Smith’s book ‘Just Kids; a book filled with her past, a New York world of characters, poetry, art, and music. It was rich and deeply inspiring”.

“There was also something happening in the wider world that had an impact – something that I could directly relate to and needed to respond to. People were bravely standing up against mental and physical abuse, bigotry, sexism, racism and the lies that constantly push the world into fraught and difficult times”.

“Then, of course, there was the personal – my inner response to what I was feeling”.

The album was produced by Myles Wootton the ARIA Award and Triple J album of the year winning musician, acclaimed for his work with The Panics.

Meg Mac credits last year’s single, ‘Give Me My Name Back’, as being the moment she started standing up and speaking out about the things she believes in. This song about mental and physical abuse immediately captured the attention of fans and contemporaries alike, with Mac’s social media channels being flooded with sentiments echoing the song’s sentiments.

“It’s a rallying cry to stand up and speak out,” Meg says. “It’s for every person whose lives have been destroyed as a consequence of mental or physical abuse. For those discriminated against in the LGBTQI community, the indigenous people of Australia and the children abused by the church or those individuals scarred after a relationship of lies and deceit. This song is about reclaiming identity, dignity, and self-worth; for everyone who has lost an important part of themselves, which they need to reclaim in order to move forward with their lives.”

The second single, ‘Something Tells Me’, was produced by Grammy and ARIA Award winner M-Phazes and co-written with Grammy nominee and APRA breakthrough songwriter of the year Sarah Aarons. “We wrote ‘Something Tells Me’ at an upright piano sitting on the stool and singing together,” Aarons says. “I’ve been a fan of Meg since I was in high school. Sitting there making music with Meg was a dream come true”.

Meg considers ‘Hope’ to be another important creative step forward in a career of many memorable moments. “Touring America with D’Angelo remains the most deeply inspiring and influential tour and then there was a show with Gary Clark Jr at Forrest Hills in New York” – Gary Clark Jr commented “I heard this voice. I was like “I gotta go check this out.” I was blown away by how powerful her voice was and how cool she was. It blew my mind. She’s amazing”.

She has one of the most breathtaking and profoundly soulful voices in music today; an expressive and emotive instrument that brings drama to her songs about vulnerability, self-worth, and loss of identity. “My voice is who I am more than I can ever be,” Meg Mac says. “It’s when I can be free and say what I want.”

“There are some artists who demand complete silence at their shows. Some ask for it, and some just command it by the sheer power of their voice. Australia’s Meg Mac is the latter. And the sold-out show at Rockwood Hall was a testament to that soulful siren quality she exudes”. Rockwood Hall New York City – Omar Kasrawi (Bloomberg TV USA)

Meg Mac follows the release of ‘Hope’ with a performance at Splendour in the Grass in July and another US / European tour later in the year.