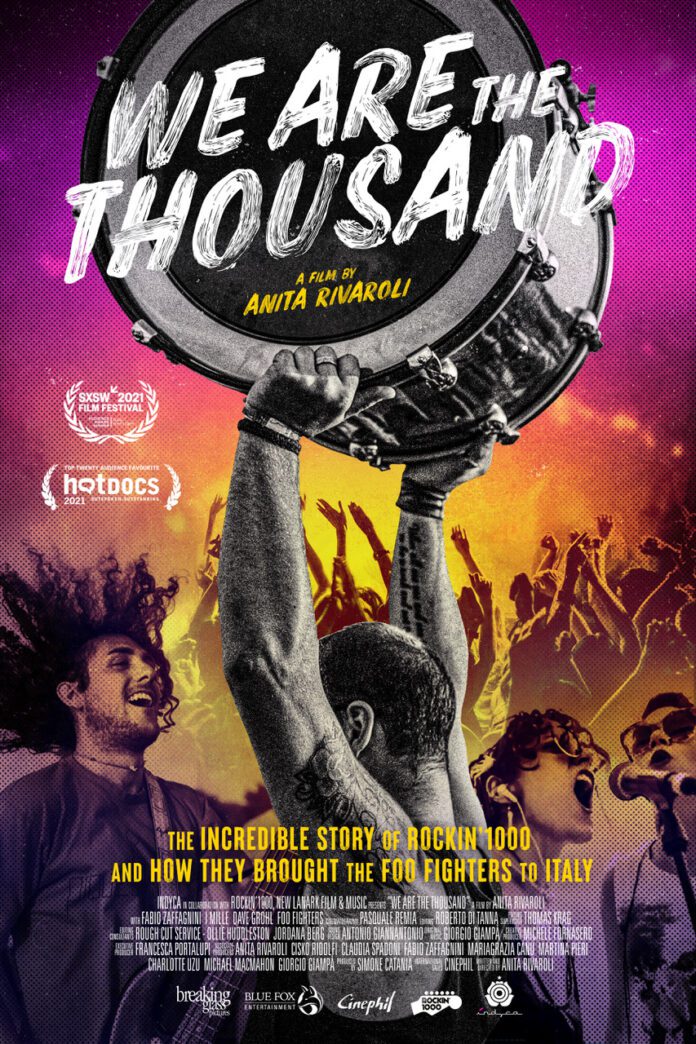 May 18, 2022 (Philadelphia, PA) – Breaking Glass Pictures and Blue Fox Entertainment are proud to announce their first joint release, the jubilant SXSW and Hot Docs breakout documentary WE ARE THE THOUSAND. Chronicling the journey taken by 1,000 musicians to create the Biggest Rock Band on Earth, the film gives a first-hand account of the group’s effort to play the iconic Foo Fighters anthem “Learn to Fly”, convince Dave Grohl to play a concert in Cesena, Italy, and the global sensation the event became.The film will arrive in theaters and on VOD, digital on June 3.

Directed by Anita Rivaroli, WE ARE THE THOUSAND proves that, together, impossible goals can be reached. Like playing a song as a tribute to your favorite rock band after putting together 1,000 musicians and getting them to play perfectly in synch. It’s what Rockin’1000 achieved, a group of Italian friends who quickly became a global community bringing together musicians from all around the world.

“This film showcases what working together, and a love for rock music, can achieve”, said Rich Wolff, CEO at Breaking Glass Pictures. “We Are The Thousand is the perfect title to begin our newfound partnership with Blue Fox.”

In 2015, Fabio, a marine biologist with a huge passion for rock music, convinced 1,000 musicians from all over Italy to gather in the small town of Cesena to play “Learn to Fly”, the famous Foo Fighters’ hit. His aim was to convince Dave Grohl, the leader of the band, to come and play in his town. A video clip of the performance together with Fabio’s speech was published on YouTube, where it was viewed more than 50 million times. Soon afterward, Dave Grohl got the message and he decided to make the dream of the thousand come true by bringing the Foo Fighters to play in the village of Cesena. That was the beginning of an incredible adventure that created the largest community of rock music lovers, and changed the lives of many people. Forever.

“Teaming with Breaking Glass Pictures and Blue Fox Entertainment is exciting and the perfect fit for us”, said producer Simone Catania. “US audiences have connected with WE ARE THE THOUSAND from day one. And now with an Audience Award from our North American Premiere at SXSW, our most favorite festival in the world, we are coming full circle and are thrilled to have the film released widely in North America.”

WE ARE THE THOUSAND will receive a Day-and-Date release, opening in theaters June 3, as well as on VOD/digital platforms including iTunes/Apple TV, Amazon Prime Video, Google Play, Xbox, Vudu, Vimeo, DirecTV, Dish Network/Dish Digital, and through local cable & satellite providers.