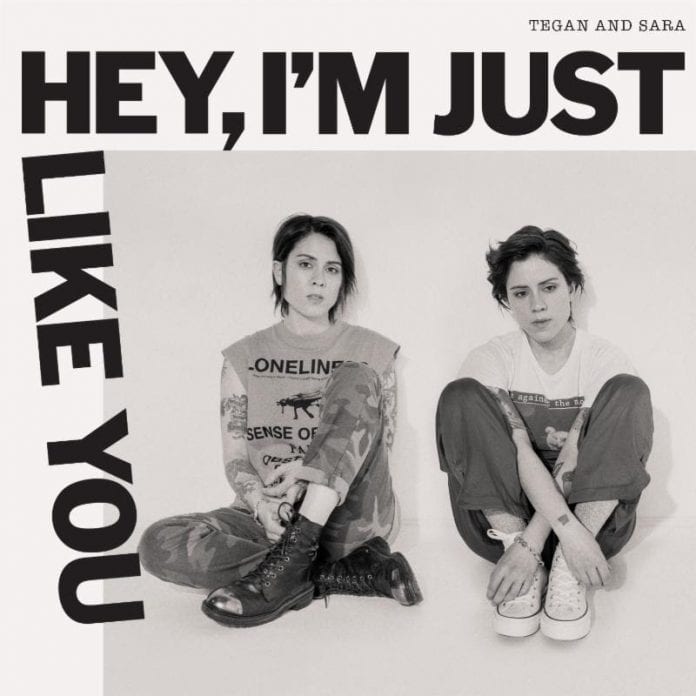 September 27, 2019 (Los Angeles, CA) – Tegan and Sara’s new album, Hey, I’m Just Like You, was released today by Sire. The album – which features new recordings of their very first songs, written between the ages of 15 and 17 – follows their first memoir, High School, which was published by MCD X FSG (USA) earlier this week. To celebrate, Tegan and Sara will perform on The Late Show with Stephen Colbert tonight and discuss both the album and the book. They will visit A Little Late with Lilly Singh on October 2.

Their sold-out, multi-dimensional headline tour continues tomorrow with a show at the Orpheum Theatre in Los Angeles. One dollar from every ticket sold on the tour will benefit the Tegan and Sara Foundation, which fights for the health, economic justice, and representation for LGBTQ girls and women. See below for itinerary and visit teganandsara.com for additional information.

In this feature, The New York Times noted, “The feminist pop stars look back at their traumas, triumphs and life as identical twins… Some of the songs evoke the ‘90s indie pop of the band’s Lilith Fair era, while others could be the seeds of electronic-dance bangers. The connective thread is the unguarded emotionality of a teenage perspective.” Entertainment Weekly observed, “The indie-rock duo’s new memoir and companion album ditches rock stardom for a funny, raw, and relatable look at being a teen.”

Pitchfork, USA Today and Billboard hailed Hey, I’m Just Like You as one of the most anticipated albums of the fall. Paste said, “you can hear Tegan and Sara’s younger selves coming to terms with early relationship experiences, rejection, their own queerness…The time-capsule quality of the material allows for multiple meanings. When sung by a thirty-something, the deceptively ebullient ‘We Don’t Have Fun When We’re Together Anymore’ could be a lament for a passionless marriage. In fact, it’s a teenager venting about alienation within one’s own friend group.”

Listen to NPR Fresh Air host Terry Gross interviewing Tegan and Sara HERE. In a new episode of the Genius series Verified, Tegan and Sara break down the lyrics to the track “Don’t Believe The Things They Tell You (They Lie).” View HERE.