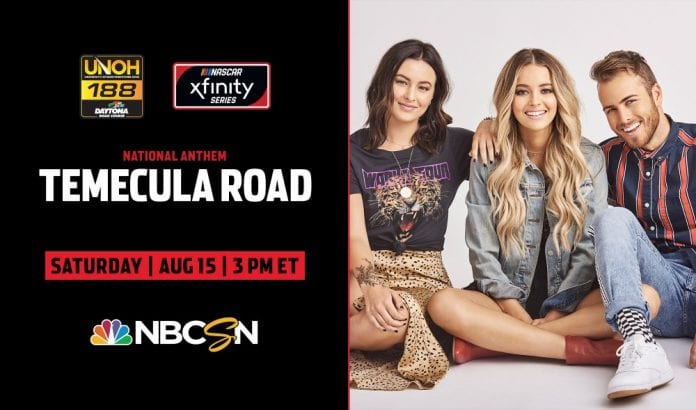 Temecula Road, named after the California town, is comprised of sisters Emma (21) and Maddie Salute (19), and Dawson Anderson (21). The group has been lauded by CMT, The Huffington Post, Sounds Like Nashville, and Taste of Country as one of the top new country recording artists. Their signature sound and covers have also earned praise from Carrie Underwood, Dan + Shay, and Brett Eldredge.

Temecula Road, signed to Buena Vista Records, has released three new acoustic tracks, “Fades” which hit Top 5 on the Radio Disney Country Chart, followed by Rolling Stone Country Song You Need to Hear “Never Knew I Needed You,” and the soulful track, “Maybe Not.” They also released a cover of multi-platinum No. 1 smash, “The Climb,” prior to graduation season. With over 13 million streams and counting, it is their original music that is now putting them on the map.

The trio made their Grand Ole Opry debut at the Ryman in November 2019 and returned to the Opry stage earlier this year in February. Over the past two years, Temecula Road made debut performances at C2C’s Country Music Festival in London, Stagecoach Music Festival and the CMA Music Festival.

The band was named one of Radio Disney’s NEXT BIG THING artists and was nominated in “The Freshest! – Radio Disney Country Best New Artist” category at the Radio Disney Music Awards, putting them in great company alongside Maren Morris, Lauren Alaina and Old Dominion.

To learn more about Temecula Road, visit temecularoad.com. Saturday’s UNOH 188 can be seen on broadcast television at 3:00 p.m. ET on NBCSN and heard on radio via the Motor Racing Network (MRN).