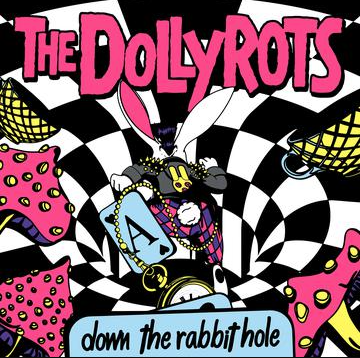 After having to postpone most of their 2020 and 2021 tour plans due to Covid-19 the Dollyrots are excited to get back on the road. The band will be kicking off a March run with The Von Tramps with their first stop in Chicago. In April they are heading across the pond for shows with Bowling for Soup & Lit. Full list of dates is below with more to come. Tickets available at TheDollyrots.com.

The Dollyrots are Kelly Ogden on vocals and bass and Luis Cabezas on guitar, with Justin McGrath on live drums. “We are so ready to get back on the road… I miss the live show connection, the loudness, the energy, man… I even miss the truck stops. These shows are a long time coming and we’ve got a lot of pent-up rock and roll energy to share. Can’t wait!,” says Ogden.

On January 21, the band will release Down The Rabbit Hole, a 24-track collection of B-sides, rarities, and cover songs with a Dollyrots twist. The diverse collection features songs from throughout the band’s 20-year history, remastered and including some previously unheard tracks and alternate takes. Down The Rabbit Hole is available for pre-order now as a deluxe 2-disc digipack with fold-out poster insert and will be available at major retail outlets and streaming platforms both in the USA and abroad via Wicked Cool Records. Get Down the Rabbit Hole at your preferred music service here: https://orcd.co/downtherabbithole.

Stream “Too Fun For My Health” here: https://www.brooklynvegan.com/stream-the-dollyrots-new-indie-pop-punk-ripper-too-fun-for-my-health/

An unexpected side effect of creating Down The Rabbit Hole was a chance for the band to look back over a life lived musically. “Putting this project together made me reflect on the career we’ve had, and I’m so grateful for all of it,” says Ogden. “Our band turns twenty this year, which is almost impossible to believe! We couldn’t think of a better way to celebrate than a retrospective of all the rarities.”

It’s a career well worth looking back on. The Dollyrots have released albums on Panic Button/Lookout and Blackheart Records and are now working with Little Steven Van Zandt’s Wicked Cool Records. They’ve hit the Billboard Heatseekers chart multiple times, they’ve been featured in movies and TV shows, they’ve shared stages with some of punk’s biggest names, and they once baked several hundred cookies for all the fans that crowdfunded one of their albums. Kelly is currently the host of Sunrise Surprise radio show weekday mornings from 4 am EST to 8 am EST on SiriusXM’s Underground Garage (Ch. 21). You can also hear Kelly voicing Stevie Van Zandt’s “Coolest Songs in the World”, a brand new station on SiriusXM (Ch. 721.) Go to www.SiriusXM.com/streaming to learn more.

Luis will be a guest on the long-running on-air interview and podcast series “Coolest Conversations” with Mighty Manfred in Little Steven’s Underground Garage (SiriusXM Ch 21). The interview will air just after 2 pm eastern time on Friday, January 28, you can also catch it on your favorite streaming platform.

The Dollyrots are currently in the studio working on new music to be released in 2022. See the video for “Just Like All The Rest” from Down The Rabbit Hole here: https://youtu.be/hT0QAzaVco4

March 15 The Melody Inn Indianapolis, IN