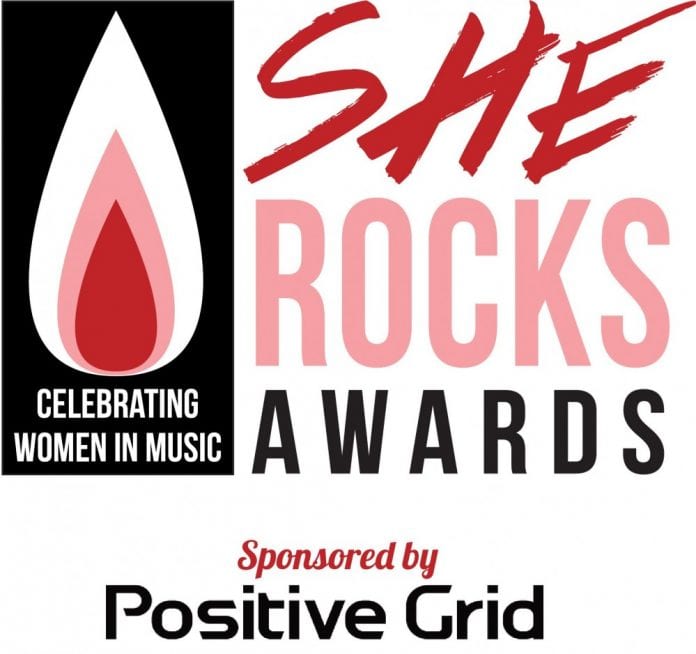 Los Angeles, CA, November 10, 2020– The Women’s International Music Network (the WiMN) proudly announces a stellar array of honorees for the 2021 She Rocks Awards, sponsored by Positive Grid. This year’s ceremony will be very different, as it will be done virtually. With the current pandemic situation, and NAMM moving to a virtual convention, the She Rocks Awards are reimagining the ceremony to fit the current times. The ceremony itself will continue to pay tribute to women in the music industry with the ninth annual She Rocks Awards taking place at 6:30 pm PT on Friday, January 22, 2021. This high-energy evening will include live virtual music performances, awards and speeches, celebrity appearances, a fabulous silent auction, and much more, all available online. A VIP gift box and afterparty are available for the ultimate She Rocks experience.

This year’s virtual event is open to the public, and VIP tickets can be purchased at sherocksawards.com.

The 2021 She Rocks Awards recipients include:

Additional honorees and featured guests will be announced soon. This year’s event will be hosted by the previous award recipient, LZZY HALE frontwoman for the rock band, Halestorm, with Yahoo Entertainment’s Lyndsey Parker hosting the pre-show countdown.

She Rocks Awards founder Laura B. Whitmore comments, “The She Rocks Awards was created to bring us together and lift us all up with an evening of positive community and shared experience. This year is no different!  I am so thrilled to honour these amazing role models and share their inspiring stories.”

She Rocks Awards pays tribute to women who display leadership and stand out within the music industry and has become a standard at the NAMM Show. Previous award recipients include Melissa Etheridge, Pat Benatar, Gloria Gaynor, The B-52s, Suzi Quatro, Colbie Caillat, Sheila E, Chaka Khan, Ronnie Spector, Orianthi, Lisa Loeb, The Bangles, and many more, plus a collection of role models from all walks of the music and audio industries.

Learn more about the She Rocks Awards and where to tune in the evening of the Awards at sherocksawards.com.