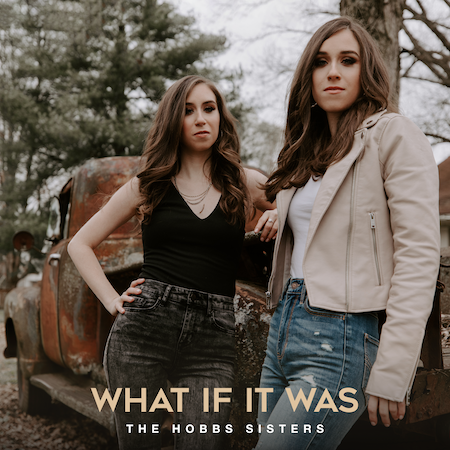 NASHVILLE, Tenn. (March 19, 2021) – Twin-sister duo, The Hobbs Sisters, released their newest single “What If It Was” today. This catchy song, exclusively premiered by Sounds Like Nashville, has them questioning what could have been and if they should have given their love one more try with their dynamic harmonies. The twins, Lauren and Hannah, take the listener on an emotional journey of a relationship that could still have potential with their rhythmic guitar and lyrics written by The Hobbs Sisters and Sean Swenson. Listen to “What If It Was” here to truly get the feeling of what if it was meant to be.
“When we wrote this song, we tried to capture that relatable feeling of running into an ex and wondering if it was right to break up. This is one of our favourite songs we’ve written and we’re so excited for everyone to hear it!” says The Hobbs Sisters.

Pittsburgh, Pa. natives, Lauren and Hannah have been travelling to Nashville since graduating Wake Forest University, but finally made the move three years ago. With their solid following in their home state, The Hobbs Sisters are starting to make a name for themselves within the Nashville music community. They were selected by Nash 103.3 for Rhythm and Boots as the opening act for Blanco Brown as well as a Top 10 Finalist for the Nashville region in the 2018 Nash Next Competition. The two have shared stages with Lady A, Charlie Daniels, Brett Eldredge, Sammy Kershaw, Diamond Rio, Aaron Tippin and Trent Harmon as well as Jana Kramer, Maddie and Tae, Cassadee Pope and RaeLynn as part of Y108’s Girls With Guitars Concert.