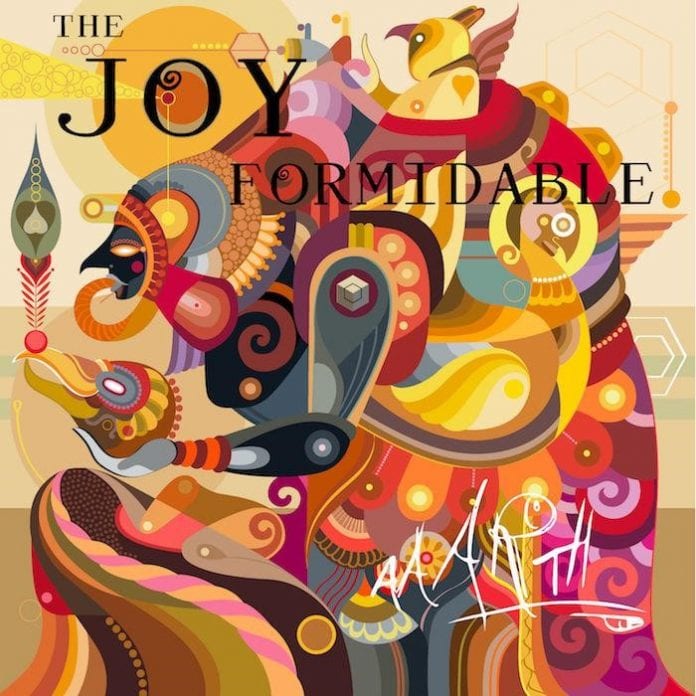 NEW YORK — June 26, 2018 — Today, Welsh trio The Joy Formidable announce their return in the shape of their fourth album, AAARTH. Set for release on September 28, 2018 via Hassle Records, the band continues to sit at the forefront of inventive and aggressive guitar music with AAARTH, taking what can be done with the instrument to new levels with each album. The band first peaked fans’ curiosity last month when Consequence of Sound premiered the official video for “Dance of the Lotus”, which inspired rumors of a new project; yesterday, the BBC’s Radio 1 debuted AAARTH’s newest single, “The Wrong Side”. The Joy Formidable will tour Europe in mid-August before joining Foo Fighters for six September dates, and an album tour throughout North America until mid-November (dates below). AAARTH will be available on a multitude of formats, including CD, streaming, download, exclusive vinyl, and an extremely limited boxset available via The Joy Formidable’s AAA Music Club, a unique annual subscription that offers fan bonus items and access to 10 extra tracks. The album is available for pre-order today.

The Joy Formidable is comprised of Ritzy Bryan (lead vocals, guitars), Rhydian Dafydd (bass, backing vocals) and Matt Thomas (drums, percussion). Formed in North Wales 10 years ago, each album they’ve released has been a joyful adventure and reflection of their fearless, creative discovery and self-evolution. The critically-adored trio has always refused to be fenced in or fit in — that restless and boundless artistic journey continues on their forthcoming album, an arresting and unapologetic tour de force that finds a band at its apex with no sign of getting comfortable.

AAARTH follows 2016’s Hitch, which was critically-acclaimed by Pitchfork, The Guardian, Stereogum, L.A. Weekly, SPIN, and Clash. The forthcoming record marks a transformative, near-psychedelic rebirth that channels long-held anger, soundtracking a chaotic global period of injustice and division, setting it against a deeply poignant backdrop of personal experiences and healing. Bryan explains, “With life not always being that kind, you can either go down a really dark hole or you can smear yourself with colour and reverie and try to forget. That’s what we did with AAARTH; we threw ourselves into this beautiful vivacious collage of experimentation, real meets unreal, and stopped giving a f**k about things that didn’t matter, and started caring more about the things that are worth your time.”

The album came into being in their mobile recording studio as the band traveled the globe, evident in the music that intertwines the whispering hills of Wales with the otherworldly rainbow canyons of the Utah/Arizona border. Uniting the personal with the mythical and symbolic, Bryan says, “We’ve definitely made a colourful, mystical collage with this record, partly because of our surroundings. Those multi-coloured sunsets & the primeval elements of nature in the Southwest – it’s emboldened our imaginations in the songwriting and the production. I love stories and seeing symbolism and meaning change with different cultures and interpretations. I see it in my lyrics, a lot of the imagery plays on being ambivalent because I’m often expressing a lot of things at once. That’s true of the title; it falls somewhere between a scream, an exaltation, a play on words, and then this motif of the bear (“arth” in Welsh) that spiritually represents strength, wisdom & healing.”

That symbolism reveals itself in the album title, as well as the imaginative, bright cover art, designed by Fernando Chamarelli. Similarly, each track is meticulously weaved into the next, ultimately telling a story with a variety of overarching themes.

Last week, the band returned to the live circuit with a sold out UK show at Meltdown Festival, curated by The Cure’s Robert Smith. Following the rapturous response, the band is currently preparing for a full European tour, beginning in August. From there, the band will join Foo Fighters for a stretch of their North American tour, a request that came from Dave Grohl himself. The two bands will embark on a tour of six cities throughout the West Coast and Canada, including Seattle, Washington; Edmonton, Alberta; Calgary, AB; Vancouver, British Columbia; Portland, Oregon; and San Jose, California, before continuing their own dates supporting AAARTH.