The Rattle is announcing its first Los Angeles-based Venture Label artist-led startups with original creations changing the way people think and behave around music and culture. Those being backed with funding and a dedicated venture building team include Animas, a virtual reality-based local tour guide for small cities and places led by artist Alexandria Rowan, and FINKEL, an Anthony Bourdain-style music and culture concept by musicians Brian and Jane Spencer.

Expanding on the first round of UK-based Venture Label companies, The Rattle has chosen to grow its vision of disrupting how artists and technologists create by partnering with a select group of LA Rattle members. The idea behind the partnerships is to prove music culture can be  a universal language capable of breaking barriers. “In our opinion, music in particular is one of the most effective forms of communication across borders,” said Chris Howard, CEO of The Rattle. “So it’s important to us that we prove music culture can create positive change across the globe no matter where it was made. Bringing The Rattle to the heart of Western music culture–LA–was a bit of a no-brainer.”

The LA environment supports unique types of artists and collaborations, thanks to the culture of the city’s diverse creative communities. It’s the city that people flock to become famous, making it fertile ground for eager innovators looking to break rules and hack new ways into industries from film to gaming.The Rattle LA is tailored to support AV creators, for example, and its varied studio spaces are highly configurable for any artist’s or hacker’s needs. “LA champions creative curiosity, be that through disruptive new mediums in film and television, or technological platforms themselves,” said Dr. Kate Stone, artist-hacker mentor with The Rattle. “The Rattle builds on that spirit, providing a safe space for creators to experiment.  Members are surrounded by other people who are willing to take a risk; it encourages creative vulnerability without the fear of failure.”

Additionally, like any other disruptive founder, artist-founders need risk capital in order to make these industry-disrupting changes, and The Rattle recognized LA as largely lacking that type of funding community. “Let’s face it. Both Animas and FINKEL would miss out on the more normal types of risk capital found in the Valley,” said Howard. “They don’t speak the language of tech startups. So ex-Google types or the likes of Venture Capital investors struggle to understand the opportunity in front of them. But, on the flip side, neither of them look and behave like signable artists either, meaning traditional LA gatekeepers would likely take a pass. To us, they represent a new breed of artist-led disruptor that is going to take over the world. Artists that combine their art with disruptive startup principles. We believe that movement starts in Los Angeles. And that’s precisely why we came here. LA has its own kind of rebellious nature. In LA, it’s about being seen, about this incredible optimism and energy. It’s about saying, ‘Let’s just do it.’”

Investors have backed The Rattle’s prototype Venture Label with $1.5m. They expect The Rattle team to be brave and do things labels, traditional venture capital or accelerators simply wouldn’t do. They pick talented artists and hackers from within their LA based membership. Each artist-founder on the Venture Label is provided a dedicated team–many of whom come from non-traditional backgrounds like technology hackers, community managers, web developers, and startup makers–to help develop a disruptive artist-led company. These founders also receive a stipend for a year, allowing them to focus on their project full-time with the goal of turning their creative project into a credible, backable startup.

Venture Label partners were chosen by a wide variety of people, using the same methodology as both ycombinator and MIT to identify talent. Each project was supported by references from their peers, evidence from their fans or users that they meaningfully create behavior change, and a vision for a company that could become disruptive in nature. The team sought original inventions and industry game-changers with strong potential to shake up culture, industry, creativity, and creation as we know it. In short, that they aligned with The Rattle’s mission. 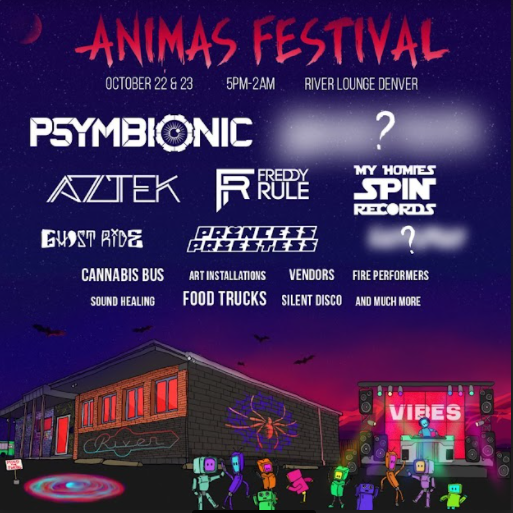 Animas
Animas, a virtual reality tour guide and venue technology platform founded by musical artist Alexandria Rowan, found roots during the pandemic. When Rowan needed to perform, she simply built her own virtual show in which to perform for her fans. The earliest stage member of the group, The Rattle has helped her dig into her project ideas, craft her venture mission and her reputation as a great founder within the industry. By digging into why Animas was created, Rowan expanded on her original concept to allow any small city, town, or venue to become its own virtual reality showcase.  This concept allows for digital environments to run congruent with real-life festivals.

In August, Animas hosted its first prototype event in the River North Art District (RiNo) of Denver. The venture mission behind Animas is to reimagine how cultural tourism works for small and emerging cities.  During their first prototype, the entire interior of the show was filled with art available for purchase with 100% of the money given to the artists. Local vendors and breweries also filled the parking lot like a small village, inviting folks to walk right in as space was available.

With the first test event under their belt, the Animas team will host an Augmented Reality (AR) event, mingling VR technology in a real-world setting, in October. The event will showcase even more local art and vendors. There will also be an AR scavenger hunt, in which a couple partnering vendors will provide VR clothing participants can purchase, then scan for pop-ups of animated images and clues.

“I’ve found having outside eyes to provide direction on my choices as an artist and entrepreneur, learning about opportunities available to me, all has been appealing,” said Rowan. “The mindset shift to entrepreneur was a change I didn’t know I needed. And getting feedback was great–the co-working part of the process and getting to hang out with like-minded people has been wonderful. I can just be my weird self and connect with other weird, wonderful people being completely themselves. It’s a built-in community.” 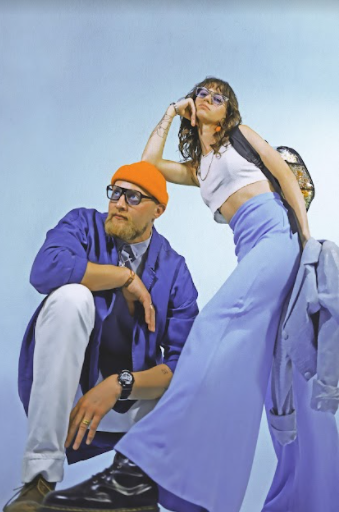 FINKEL
FINKEL was founded within The Rattle with a rather simple purpose: to show people how to “follow the fun” by enjoying art like it’s a game and not taking everything in life too seriously. Founders Brian and Jane Spencer, a married couple and musical duo piloted this concept with the idea to perform in Antarctica. Their idea grabbed the attention of a couple documentary filmmakers fascinated by their mission to record their journey and meet with communities around the globe, gather their stories, and have fun making music using sounds from the environment. The music itself is popular–almost mainstream–but built-in unique ways that reflect the communities the music is inspired by while demonstrating the fun one can have along the way. This pilot inspired Brian and Jane to embrace The Rattle venture philosophy and evolve that concept into a dedicated entertainment and production company, blending “Anthony Bourdain for Music” with the mischievous and playful formats commonly found on TikTok.

Their first documentary film, Islanders, is set to release this year. Islanders will include film, music, animations of the environment, all from Mackinac Island in Northern Michigan. This is FINKEL’s first project under the venture label, and the Rattle team will help them figure out what to do with the product once it’s made, including preparing for docuseries or feature-length possibilities.

“Creativity has been such a huge benefit to our lives and the amount of vulnerability it takes to get out there and try something,” said Brian Spencer. “We hope to inspire others to step by their own ways in things, to get into new situations, and to be more vulnerable with themselves. We want to take away the fear around creativity, to show you can just mess around and have fun.  We’re simply highlighting human empathy and the people and cultures that have a lot to bring to the musical conversation, all for the purpose of exploring creativity and getting vulnerable with people in a non-judgmental way. You don’t have to be an artist to be an artist. It’s our way of bringing people together.”