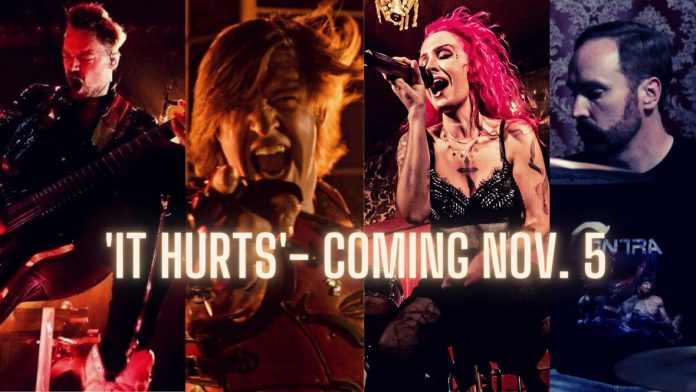 VK Lynne along with Ty Christian, Timo Somers, and Dan Hegarty have released a new single “It Hurts” via DI Records.

What started out as an international and long-distance pandemic project turned into a hybrid in-person, real life collaboration when Ty Christian, founder of Mad With Power Fest and lead singer of Lords of the Trident, flew to Los Angeles to shoot the music video for “It Hurts”, a duet with singer-songwriter VK Lynne of The Spider Accomplice.

The idea to put a symphonic metal spin on the alternative blues song came to VK as the lockdown dragged on. Some folks may remember her Vita Nova project in 2013, which saw her gather up 13 artists from 6 different countries to create an original album of gothic metal songs, all recorded virtually. She explains:

“Back then, I wanted to make the point that artists are only limited by their imagination; with Vita Nova, I was able to ‘sing with’ people that, up until then, I’d never met in real life. For this song, I wanted to make a statement about genre. ‘It Hurts’ was originally recorded by the great Beth Hart, a blues icon, and Dutch singer-songwriter, Born. Beth has been a big influence on me as a musician and my songs are always just a little blues and a little metal. This has been an issue for my band, The Spider Accomplice, because many times, the industry doesn’t really ‘know where to put us,’ because ‘what is this genre?’ That’s a frustrating question, which I’ve always felt, frankly, is bullshit.”

This new version sets out to prove just that. Lynne enlisted guitar heavyweight Timo Somers (ex-Delain) and drummer Dan Hegarty (Conflict One Zero) to give the music that metal punch.

“Timo knew exactly what I was trying to do right away. I sent him the original song and two days later he sent back his interpretation, which became the framework for the whole piece.”

But she also knew that the male voice had to be a powerhouse and she found that in Ty Christian, an operatic tenor who is no stranger to cross-genre music himself. Christian is also the lead singer of the power metal band, Lords of the Trident.

Colin McGeoch of Matte Black Audio took on the daunting task of mixing and mastering the files that came rolling into his mailbox from various parts of the world. Lynne was more than elated with the results.

“I played the song for my husband, a filmmaker, who said, ‘OK, we cannot do a half-assed video for this. We have to get this crew in the same room.’” However, restrictions were still in place due to COVID, so bringing Somers from the Netherlands was impossible, but Lynne remained undeterred.

In July of 2021, Christian boarded a plane from Madison, Wisconsin, to Los Angeles and met Lynne and Hegarty to create a video that captured all the intensity they’d put into the audio recording itself.

Director Nesto Rhea and his crew filmed everything while also keeping in mind where Timo would be inserted later in editing.

“There will always be challenges and the way we make music will continue to evolve, but if we evolve with it, creativity will find a way to flourish. These kinds of projects keep us sharp and allow us to do what we love, despite the miles and the naysayers.”