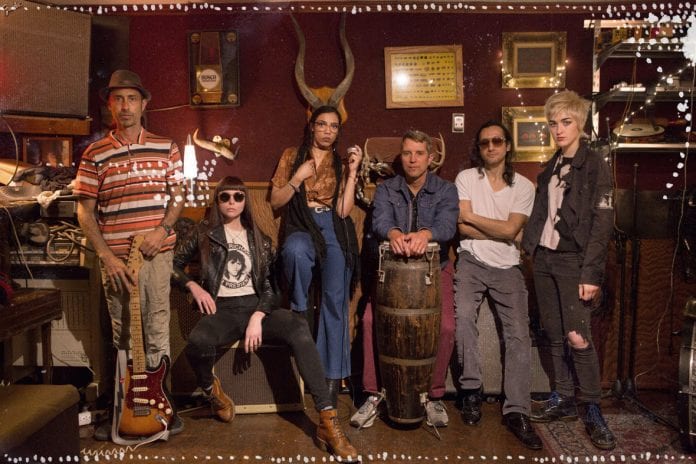 A video for the first single “Poison” is streaming here:
https://www.youtube.com/watch?v=BKp4wl5YIt8&frags=pl,wn.

“When sketching out the lyrics for poison we were writing “your poison” and “you’re poison” over and over again. Like many of our songs the lyrics have multiple layers to the meaning. “Your poison” could be words that someone is dishing out, or maybe a politician is poison in the literal sense of “you are poison.” Then there is the good side of poison. Sugar can kill you if you eat too much, but a little bit of poison can also make you happy. Everyone has their Poison.”

Formed by guitarist Matt Wignall (longtime Cold War Kids collaborator who produced their singles ‘Hospital Beds’ and ‘Hang Me Up To Dry’), WARGIRL’s music has been described as third world garage rock with afro-punk and reggae / latin influences.

Think Santana’s early records, afrobeat recordings by Fela Kuti, the psychedelic masterpiece “Forever Changes” by Love and sounds from 70s psych funk masters War (who happen to also be from Long Beach) and mix that with element of reggae, disco, garage rock and post-punk and you’ll start to understand where WARGIRL is coming from.

Led by singer Samantha Park (daughter of James Lafayette Parks, the leader of the 70s funk band Bull & The Matadors), WARGIRL’s lineup is rounded out by bassist Tamara Raye (who plays in a way that grooves like Tina Weymouth of Talking Heads/Tom Tom Club), keyboardist Enya Preston, dual percussionists Erick Diego Nieto and Jeff Suri, and Wignall on guitar.

Signed to Clouds Hill out of Hamburg. Germany (Bosnian Rainbows, Pete Doherty, Omar Rodriguez), and published by Mothership (Anti Records, Tom Waits), WARGIRL has toured Europe twice and has appeared on multiple festival lineups including Reeperbahn Festival. The band is currently back overseas for a series of shows and a featured slot at FM4 Festival in Vienna.